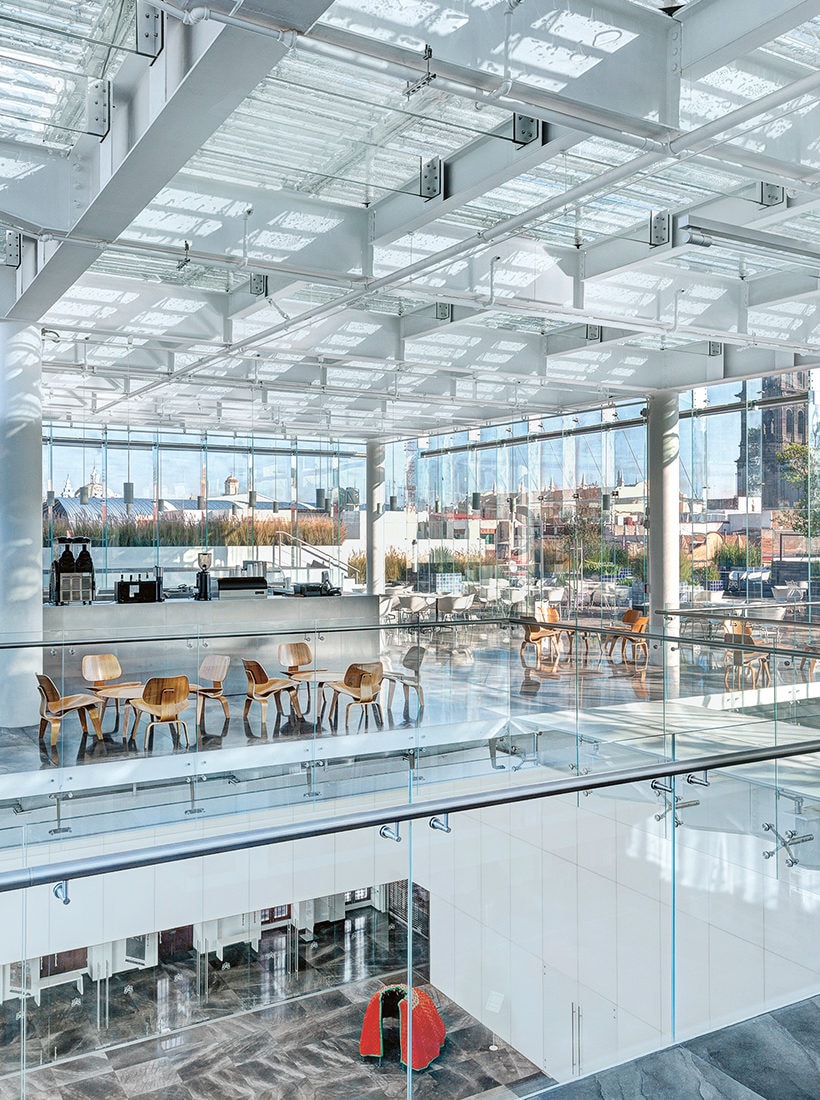 Founded in Mexico City by Enrique Norten in 1986, the studio TEN Arquitectos, besides its original office, has another in New York, since 2001, for operations on an international level. The studio now employs a staff of 85, and has developed over 400 projects, constructed or on their way to completion.

They operate on different scales, approaching multiple typologies, including public buildings, offices, museums, residential structures and single-family homes, landscape design and urban planning, all the way to the design of furnishings.

The three works selected for Interni address different themes – a museum, a university campus and a public library – sharing a focus on spaces for knowledge and culture, approached by the studio as a way of creating gathering places and references points for the city.

The Amparo Museum in the city of Puebla was opened in 1991 inside two colonial buildings from the 17th and 18th centuries. It is one of the most important cultural centers in Mexico. It contains a collection of 4800 Pre-Hispanic pieces, a section on Baroque art, and a collection of contemporary works including pieces by Javier Marín, Frida Kahlo, Diego Rivera, Vincente Rojo, just to name a few of the protagonists of Mexican art.

The renovation of the museum has made it possible to display many pieces previously hidden in the storerooms, rationalizing routes and display spaces while respecting the character of the historic buildings. These are joined by a new glass volume that completely revises the central lobby, becoming a new entrance and a spatial hinge between the various galleries.

The new glass volume features a white metal structure, a light arrangement with a filtering roof that screens the sunlight but also offers natural luminosity for the full-height space. The glass lobby vertically connects the two levels of the museum to the new terrace on multiple levels on the roof.

Like a raised pavilion, the new patio emerges above roof level, containing a large cafe surrounded by outdoor paths in which the wooden decks are joined by sections of marble and talavera (a type of local hand-painted tile). From the terrace the museum extends towards the panorama of the domes and towers of the urban landscape, marked first of all by the historic churches of Puebla.

On the other hand, the New York Public Library on 53rd Street has three levels (ground, mezzanine, basement) facing the MoMA, for which it provides a complementary public cultural space.

Open to the street with a recessed window to create a portico, the interior is directly visible to passers-by. Conceived as a single space, the library stands out for the large wooden staircase connecting the entrance to the level below; the staircase functions as seating facing a stage for the organization of debates, lectures and encounters. Along the staircase a stone wall – a twin of the one facing it on the other side – separates the space from the entrance, clearly indicating the purpose of the place which is also clearly perceptible from the street.

A public library created inside a building that contains a hotel, featuring compositional solutions that make it a public space open to interaction and encounter, with video terminals available for visitors providing information on the books available and what the facility has to offer.

In Mexico City, on the busy Avenida Constituyentes next to the large Chapultepec Park, the new campus of the Centro University is organized in a series of buildings around a green area conceived as a big internal patio of 2000 square meters.

The three interconnected buildings have an overall area of about 5000 square meters, with a flexible-size auditorium at the center of the layout, and a multimedia library on four levels accessed from a monumental staircase by the Dutch artist Jan Hendrix.

These facilities are joined by a film studio of the latest generation and a series of textile, fashion and design, jewelry and pottery workshops, in a sort of mission aimed at “rethinking creative education, raising the professional standards of disciplines,” as Gina Diez, co-founder of the university, explains.

The workshops are accessed from a long external staircase that follows the internal facade like a suspended ribbon. The refined interlocks between the various architectural parts of the campus unite two rectilinear volumes of different heights placed parallel by means of the crosswise space of the auditorium.

The upper levels, whose facades feature a forceful white sunscreen with horizontal bands, contain other flexible spaces for study and work.

Amparo Museum. The new glass lobby of the Amparo Museum in Puebla rises to the roof of the existing colonial building, to create a cafe and a panoramic terrace from which to observe the historical city. Photo by Agustin Garza - Not Evident Architectural Photography
Amparo Museum. View of the colonial facade of the museum with the new glass volume, recessed with respect to the facade. Photo by Agustin Garza
Amparo Museum. The new glass volume is transformed at the roof level into a raised pavilion surrounded by outdoor spaces. Photo by Agustin Garza.
Amparo Museum. View of the entrance to the museum from the new full-height glass access lobby. Photo by Michael Moran.
New York Public Library. The portico on the street of the public library, whose internal spaces are visible to passers-by thanks to full-height glazing. Photo by Michael Moran.
New York Public Library. The children’s reading room. Photo by Michael Moran.
New York Public Library. The stage on the basement level faced by wooden seating between two partitions clad in gray stone. Photo by Michael Moran.
Centro Campus. The staircase by the Dutch artist Jan Hendrix, for access to the multimedia library of the university campus.Photo by Luis Gordoa
Centro Campus. Bird’s-eye view of the campus composed of three buildings around a green patio separated from the street. Photo by Luis Gordoa
Centro Campus. View of the volumetric interlock between the auditorium and the workshops above, and of the multimedia library, with the monumental staircase below and the continuous ribbon running along the facade. Photo by Luis Gordoa
#MoMA