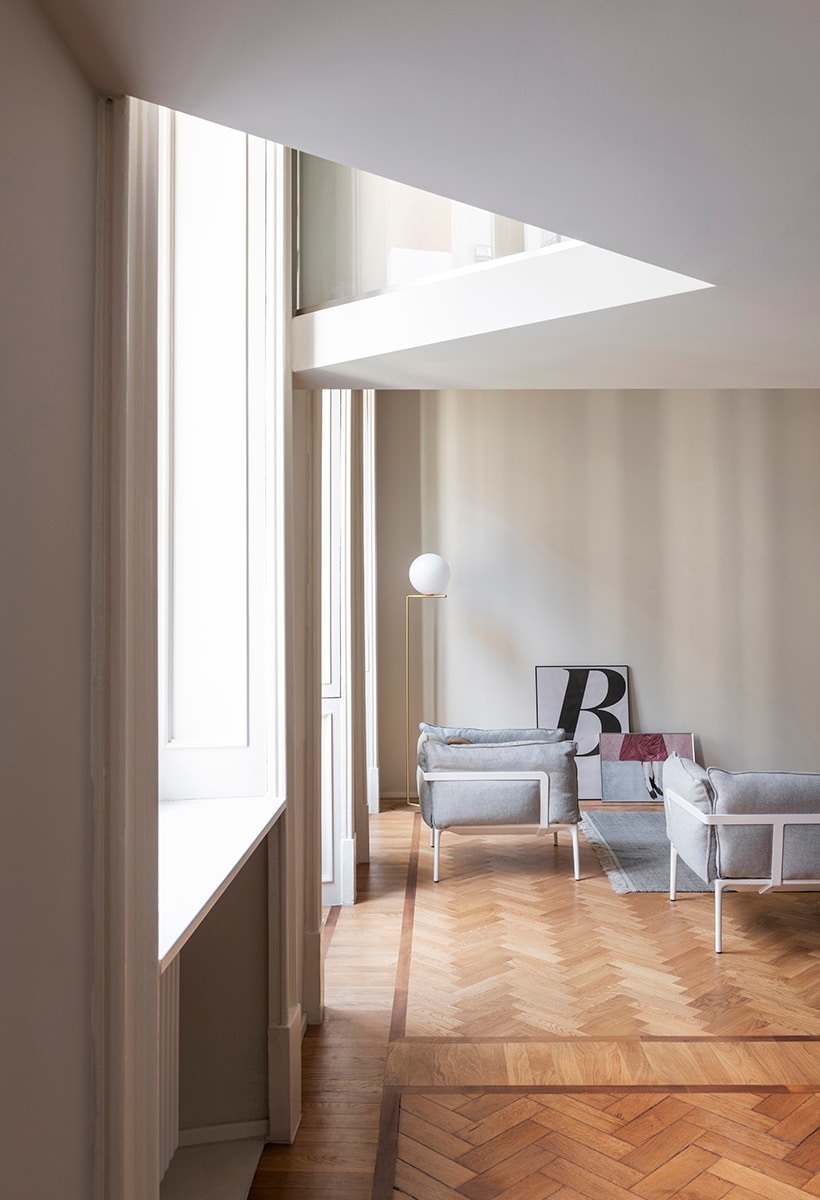 In the renovation of a historical apartment, the Italian architecture team of Studio Wok has reorganized the interiors, exploiting the height of the spaces without altering the large original windows

When the question is what form can be taken by a contemporary interior so as not to lose its identity, while avoiding the compromises of vintage furnishings, this recently refurbished residence by Studio Wok can offer some insights. In spite of the daring choices involved, this apartment somehow conserves its purely Italian spirit thanks to the presence of period facings and casements, as well as clear references to motifs of classical architecture, like the arches and the harmonious proportions of full and empty zones.

°
Studio Wok are Marcello Bondavalli, Nicola Brenna and Carlo Alberto Tagliabue. Since 2012 they have focused their research on architecture, design and landscape, paying great attention to the quality of living. They take part in national and international competitions, thanks to which they have received prizes. Their works have been exhibited in significant exhibitions during the XXI Triennale di Milano and at the Carlo Bilotti Aranciera Museum in Villa Borghese in Rome. Their methodological and design approach is artisanal. For the development of the works, they carefully detect the physical characteristics of the project site: the landscape, the materials that characterize the reference territory, the light, the atmosphere.

The interior, with an area of 150 square meters, inside a building from 1912 near Piazza Tricolore in Milan, was originally organized with bedrooms lit by large windows and placed along a corridor leading to the living room, which was much smaller and darker than the rest of the house.

“My first choice was obvious: to change the arrangement of the rooms, in order to bring more natural light and to respond to the needs of a contemporary lifestyle,” says Nicola Brenna (one of the three partners of the firm, together with Marcello Bondavalli and Carlo Alberto Tagliabue). 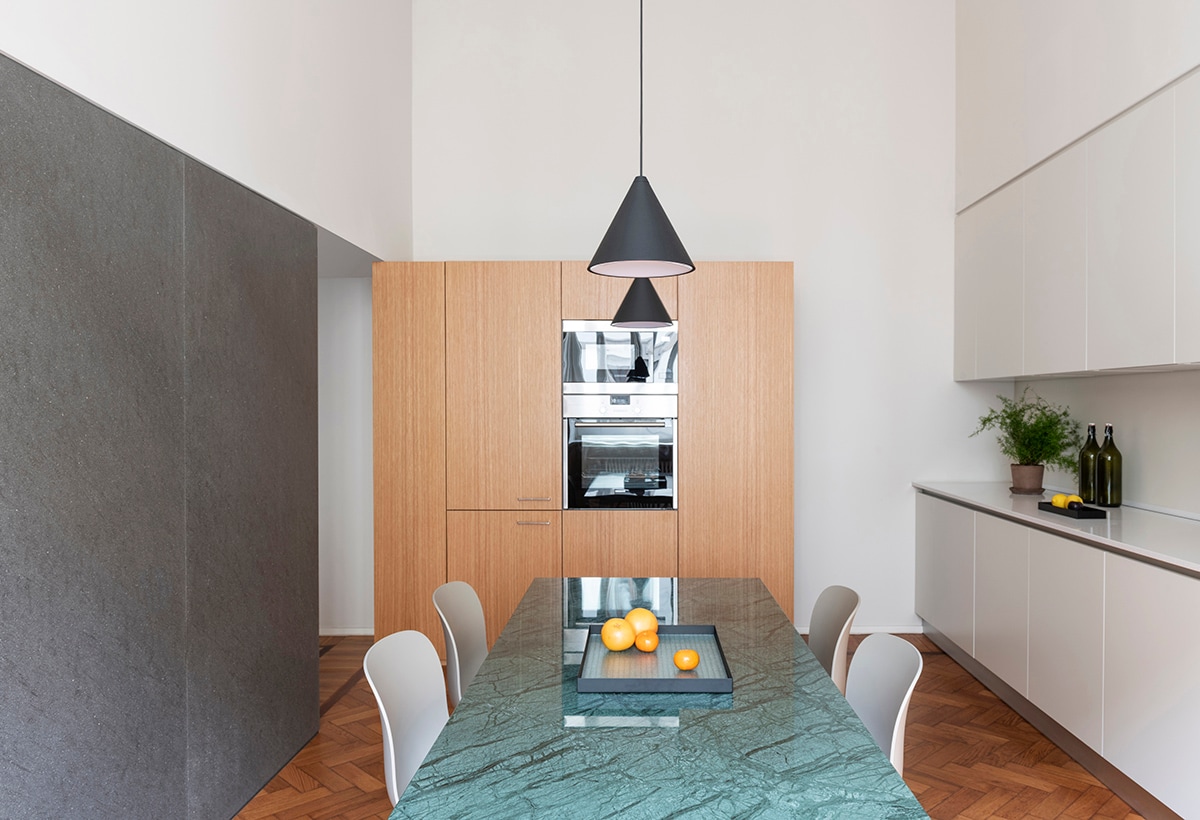 7
The table in the kitchen has been specifically designed, with a metal base and top in Verde Guatemala marble, a hue that returns in the backsplash of the kitchen and the guest bathroom.

The second decision was more complex: to exploit the height of the spaces, of 4.7 meters. “We opted for lofts throughout the flat,” Brenna continues. “For the living area, this meant coming to terms with the large windows, obviously without altering them. We found a compromise by making a triangular form cut at the point where the loft of the kitchen-living zone (2.8 x 5.6 m) meets the windows. A terse geometric design, then, forming a clear contrast with the existing structure.”

The living area in the new configuration is a single space, with the original herringbone wood floor partially restored, including the kitchen and the living room. The spaces communicate but are separated by the presence of the stairwell leading to the loft, which seems like a very clean wall of volcanic stone, also containing a wine cellar.

“The corridor leading from the living room to the bedroom zone was already there,” Brenna explains. “But we have covered it with a barrel vault that softens its image, also making reference to a common feature in Mediterranean classical architecture.” 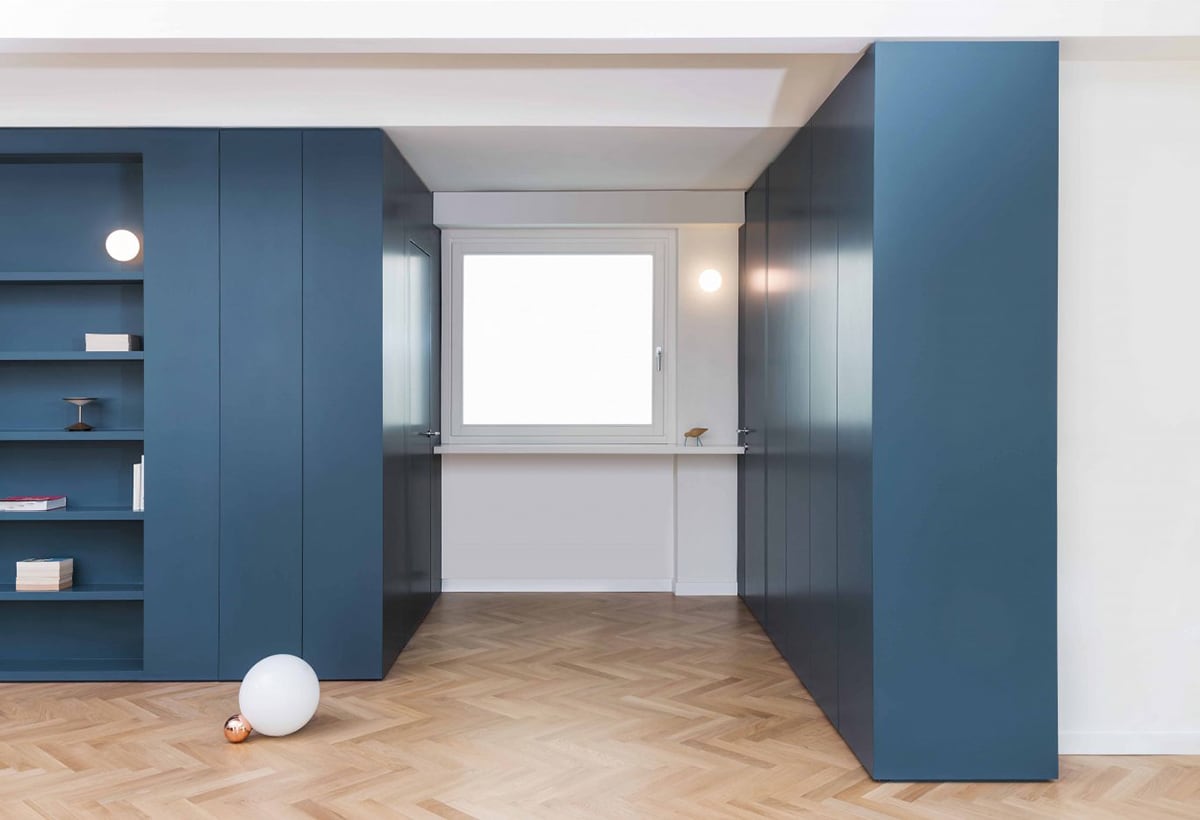 3
In this gallery some projects of the Wok Studio. Penthouse at the Ca 'Brutta. Milan, 2017. The Ca ’Brutta, designed by Giovanni Muzio in 1922, is an emblematic building in the history of the city's architecture. The request of the clients of a contemporary house in the style and spaces of living, made the comparison with the important history of the building inevitable.

The rest of the apartment is marked by the play of entrances, passages, independent but communicating areas (also vertically, thanks to the lofts). “At the end of the corridor the master bedroom is a suite in its own right, having an entrance with a bathroom (left) and a wardrobe (right).

Above the bathroom and the entrance, there is a loft for the studio,” Brenna continues. The children’s room is a single space that doubles thanks to the presence of the bathroom at the center. “In this case the bed has been placed on the loft: the kids can thus spend more time in their room, with more space to play and to study.”

“
We opted for lofts throughout the flat. For the living area, this meant coming to terms with the large windows, obviously without altering them. We found a compromise by making a triangular form cut at the point where the loft of the kitchen-living zone meets the windows. A terse geometric design, then, forming a clear contrast with the existing structure."

There are no storage cabinets in the whole apartment, and the doors and walls seem to mingle, often differentiated only by different shades of the same color. “We always do that,” says Brenna. “We think about an interior where everything is built into the structure: making the architecture absorb the functional elements allows you to live in a more flexible way, filling the spaces with objects that tell the story of the family. It is good to keep in mind that every house will evolve over time, in ways we cannot predict. The job of the architect is to facilitate, by providing an essential design.”