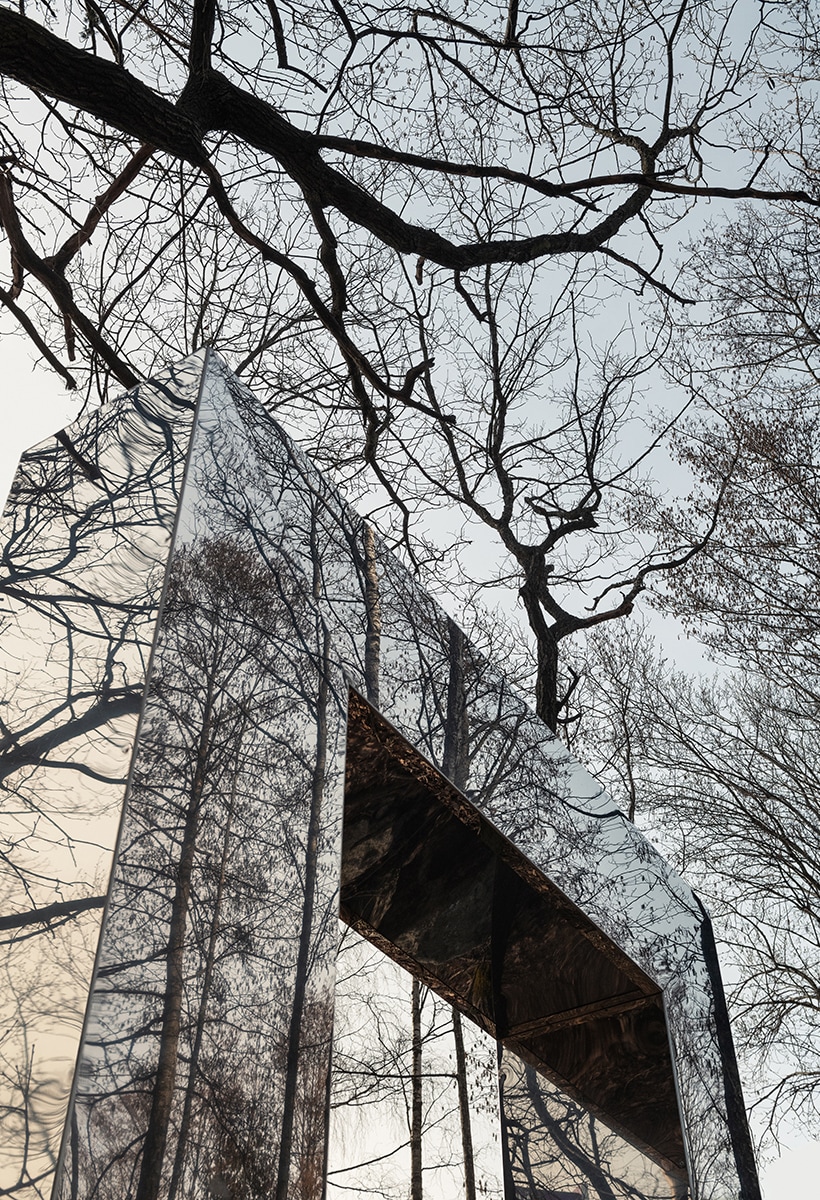 The melting of ice has made the sweeping alterations of the landscape caused by global warming clearly visible. This triggers a new level in the narration of a phenomenon that until recently was relegated to scientific circles, shifting it to a social and cultural plane. When data take on a dramatically visible character, it becomes possible to talk about an ‘aesthetic’ of climate change, which combining the dimension of tragedy with that of landscape can be seen as a contemporary version of the romantic aesthetic philosophy (a sort of Sturm und Drang of climate change).

Kant, a romantic aesthete as well as philosopher of the Enlightenment, distinguished between two categories of taste: the beautiful, which springs from an agreement – or proportion – between human perception and the perceived object, and the sublime (in etymological terms, sub limen, ‘beyond the limit’), derived from contemplation of something boundlessly large, out of proportion with respect to the human dimension, that only majestic cosmic and natural settings can create. While the beautiful generates a pleasure based on perception correspondence between an outer phenomenon and an inner emotion, the sublime, alluding to infinity, prompts both awe and fascination. 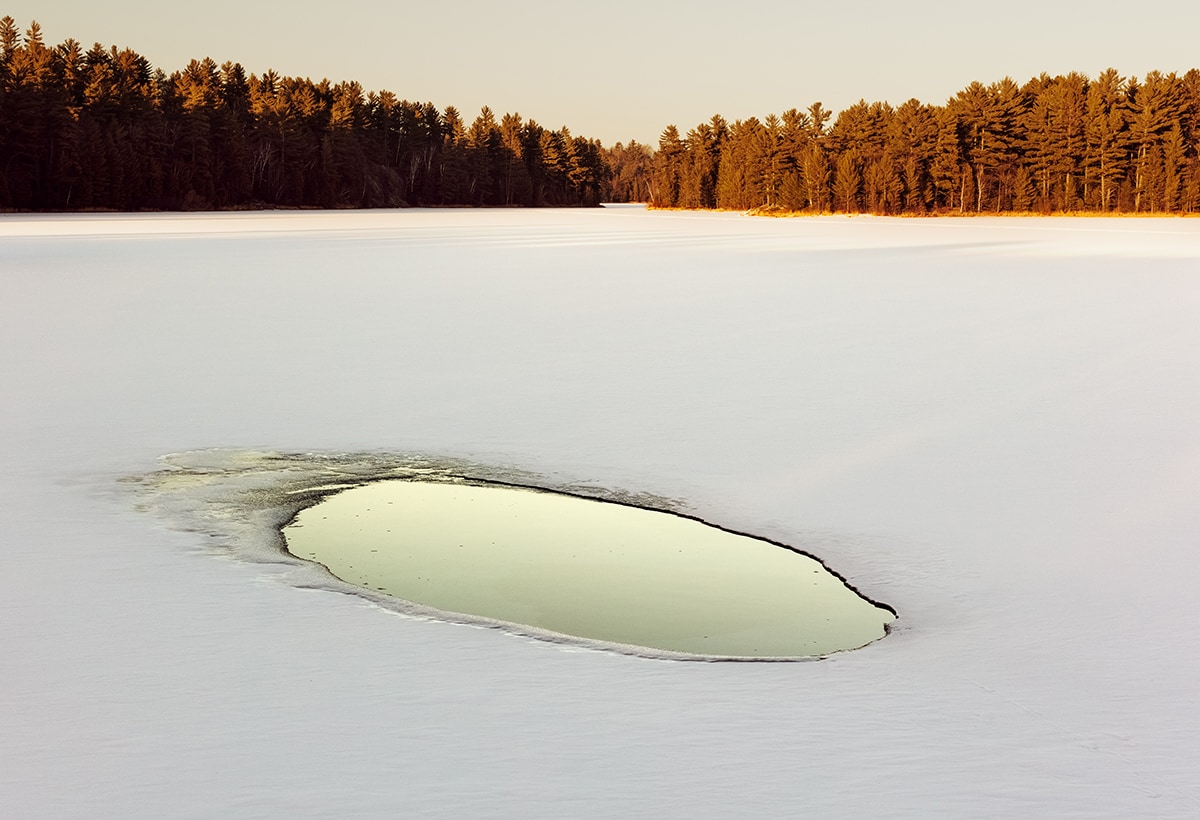 4
The photographic series Eyes Make the Horizon by Michael Zuhorski set in the Upper Peninsula of Michigan, to explore the omnipresence of water through the calm symbiosis between the gaze of the photographer and the landscape. Photo Michael Zuhorski.

Now the fact that global warming has become visible is decisive to make it become an ‘aesthetic’ phenomenon in the sense of Kant’s sublime. The planetary movement of young people inspired by Greta Thunberg and the ‘plastic backlash’ come from the ‘dramaturgical’ transposition of a phenomenon that is indeed dramatic, but without aesthetic repercussions cannot have such a deep emotional impact on the society.

Nevertheless, precisely when climate change takes on an aesthetic connotation, paradoxically the theme of aesthetics becomes the main missing link in the debate on sustainability. Getting to the possible solutions to reduce man’s impact on the environment, such as the circular economy, for example (a paradigm of production in which flows of energy and materials move in a circular way, instead of in one direction, regenerating their own process), the central role of aesthetic design becomes clear.

The wheel of the circular economy, in fact, can turn only if people collaborate, only if users can perceive a value in the ‘circular’ product and, as customers, choose it not because they should (for ethical reasons), but because they want to (because they like it, appreciate it, desire it). No engineering of sustainability can work if it is not accepted on a large scale, and for this to happen work must be done on the aesthetic meaning of circularity or, more generally, of sustainability.

“
Educating users to have a new, native aesthetic experience of the sustainable world will be fundamental for the transition towards new economic, productive, social and cultural paradigms."

So it is important to draw attention to certain recent experiences that seem to be preparing the formulation of a new aesthetic literacy for the age of sustainability, like the series of images Eyes Make The Horizon produced by the American photographer Michael Zuhorski in long sessions of optical symbiosis with the natural landscape of Michigan.

Or the installation titled Lines (57° 59’ N, 7° 16’ W) made by Pekka Niittyvirta and Timo Aho on the islands of the Outer Hebrides, of the Scottish coast, which through sensors interacts with variations of the tide, forming a subtle but spectacular visualization of the future rise in sea level.

A different key of interpretation, but converging on the same theme, is that of the installation Order of Importance created by Leandro Erlich for Miami Beach, in which the artist combines the paradox of modernity (automobiles conceived to give everyone freedom of movement, which end up trapped in traffic jams) with a post-apocalyptic landscape that seems to come from one of the many successful fictional tales of recent years (zombies, humankind decimated by mysterious viral contagion), but also from the lightness of play (sand sculptures made by kids on the beach) along with the solar and funereal transience of human life on earth (“ashes to ashes, dust to dust”). 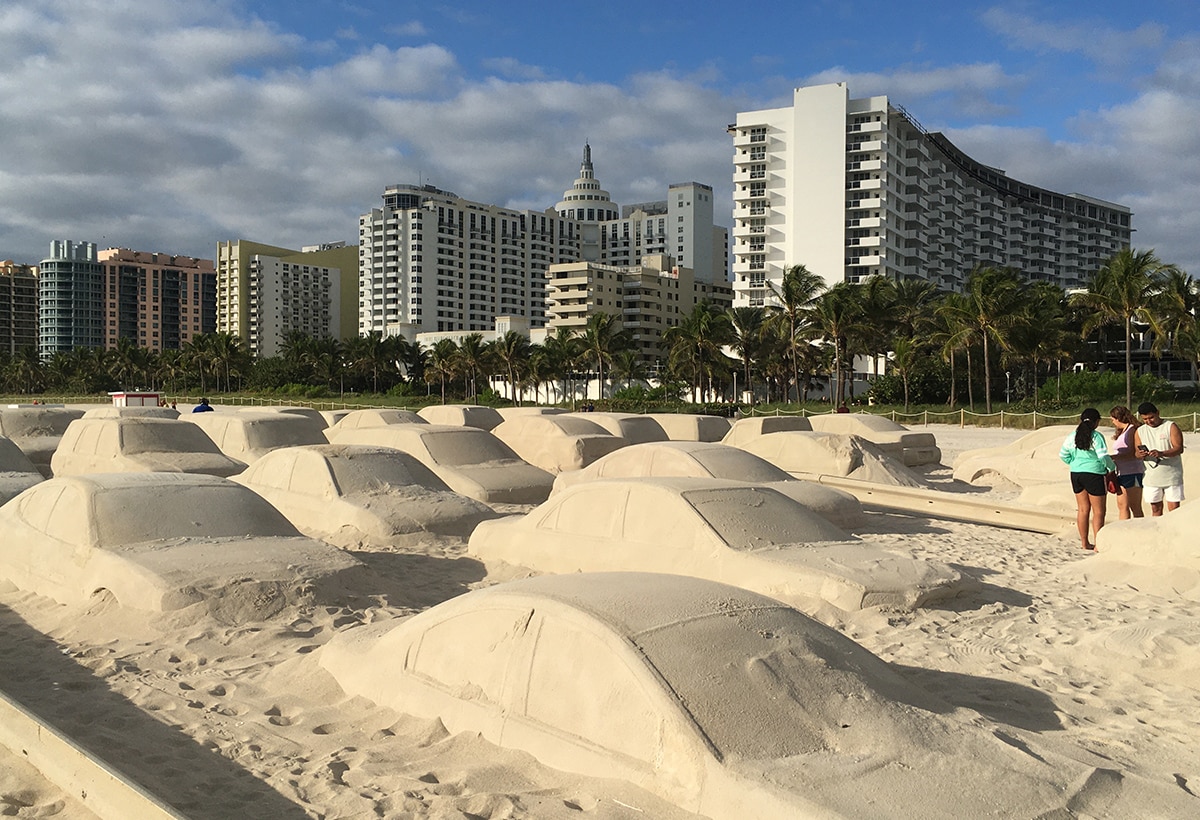 4
Order of Importance, a temporary site-specific installation (1-15 December 2019) made by Leandro Erlich by commission of the City of Miami Beach, curated by Ximena Caminos in collaboration with Brandi Reddick. Photo Leandro Erlich Studio.

Not only in art, but also in design, we are starting to see the first signs of a new narrative based on poetic respect for the environment. This is the case of the brand Cypraea, based on the idea of communicating the precious fragility of the natural ecosystem of the island of Mauritius through a concept of ‘tropical luxury’ for furnishings, exemplified by a collection designed by the architect Francesco Maria Messina with carefully selected materials like solid wenge and walnut, volcanic stone, fossil coral and sand, interpreted in simultaneously iconic and iconoclastic forms.

Halfway between art and design, the reflective installation Waiting Windows in the Swedish city of Nacka, by Note Design Studio, is an ‘architectural meditation’ on the poetry of waiting. Also in Scandinavia, this time at Lindesnes, Norway, the spectacular Under restaurant designed by the studio Snøhetta is a monolith of 34 meters resting directly on the seabed and submerged in five meters of water, an elegant and slightly dystopian work that transforms the frightening vision of rising tides into beauty.

“
Immanuel Kant, a romantic aesthete as well as philosopher of the Enlightenment, distinguished between two categories of taste: the beautiful, which springs from an agreement between human perception and the perceived object, and the sublime, derived from contemplation of something boundlessly large, out of proportion with respect to the human dimension."

Educating users to have a new, native aesthetic experience of the sustainable world will be fundamental for the transition towards new economic, productive, social and cultural paradigms. The sustainable product will not, in fact, be just a depleted copy of the non-sustainable product; instead, it has to be more beautiful, stronger in aesthetic terms, more convincing.

Otherwise we could only rely on a utopian mass embrace of ethical values connected with sustainability, something that clearly will not work, because in free market economies it is unthinkable to impose practices from the top down. Instead, we have to create the conditions in which such practices will be accepted (desired) from the bottom up. This is precisely the role of aesthetic design. To work on the beauty of sustainability, to hold together the necessity of the solution and the freedom of choice. Because in the end it will be aesthetics that makes sustainability sustainable.