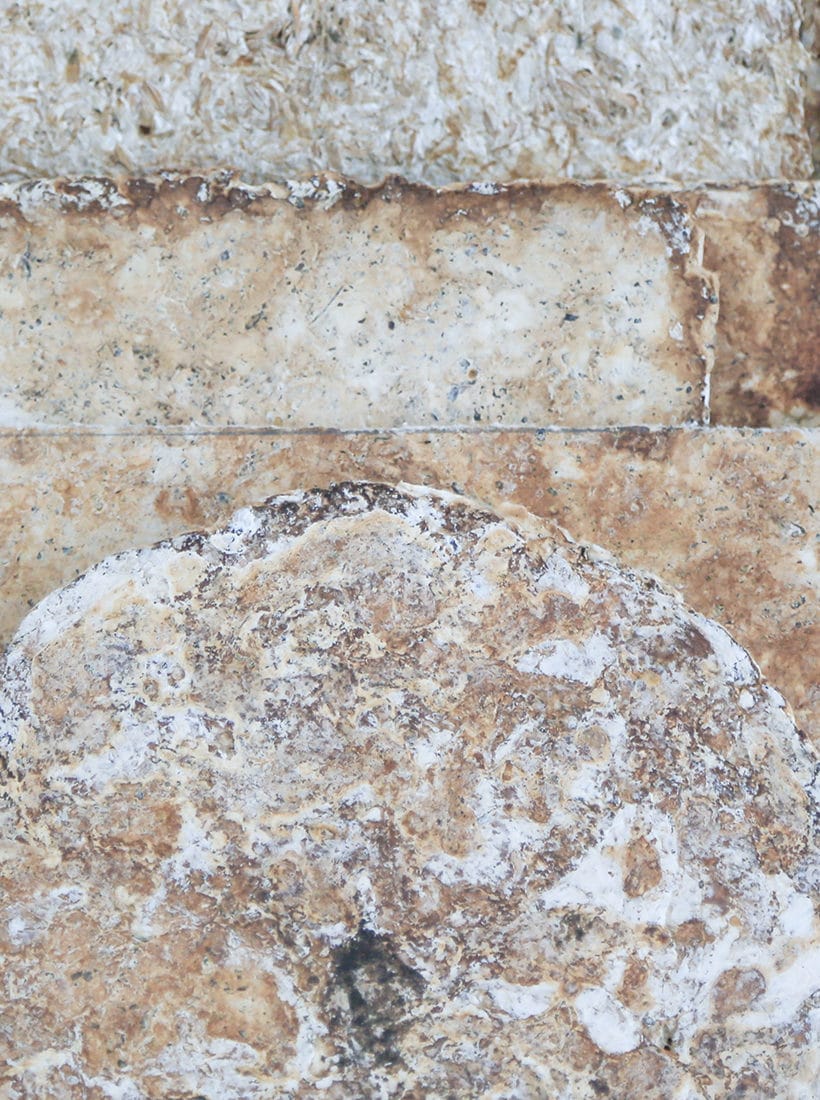 The borderline between artificial and natural is getting blurry. But while nature, its structures and processes have always be imitated by the design disciplines, today there is a research trend that seems to try to intervene upstream from natural processes, even attempting to control them. Or to study the way natural materials, also waste or living things like fungi, can be transformed for purposes of construction. Also in mass production.

The young Danish designer Jonas Edvard, trained at the Royal Danish Academy, has an alchemist’s approach aimed at reutilization of natural resources and enhancement of their aesthetic value. For a project on the ideal of ‘local’ production he has created the Terroir collection, a term that suggests the knowledge and cultural application of raw material.

In collaboration with Nikolaj Steenfatt, he has developed a material with algae and recycled waste paper, which can be spread in layers for a tactile effect similar to cork. The color is determined by the various algae gathered along Danish beaches, for a length of 8000 km, generating a sort of chromatic mapping of species. The algae, after being dried, are ground into powder and baked, becoming glue thanks to the adhesive power of alginate, the natural polymer found in brown seaweed.

Also with an eye on marine deposits, the Dutch designer Nienke Hoogvliet, with a degree from the Willem de Kooning Academy, specialized in textile design, has created a system for reduction of refuse and optimal use of algae in the textile industry.

In Sea Me, Hoogvliet has made threads from plants, which are then knotted by hand on old fishing nets to make carpets. The color of the threads is the natural hue of the algae, offering a vast and unexpected range of tones that are very resistant to light. The leftovers from the spinning process are used to make a bio-plastic material with which the designer has produced a series of bowls.

And the remains of the coloring operation can be used as indoor paint, reducing waste to zero. Organic and perishable materials are the starting point of Marcin Rusak, a Polish designer residing in London, with a degree from the Royal College of Art. In the Flora series of tables, appliques and screens Rusak traps chemically stabilized flowers inside a black resin. At first glance, from a distance, the surfaces suggest the grain of marble or the porous quality of travertine, but from up close they reveal the ephemeral and poetic virtues of the material.

More than organic, living is the term that applies to the material based on mycelium, the vegetative part of a fungus, developed by Mycoplast, the company started in 2015 by the Italian designer Maurizio Montalti, founder of the studio Officina Corpuscoli in Amsterdam. Mycoplast sets out to produce mycelium-based materials on a large scale for different fields: from construction to interiors to bio-architecture.

The first examples – decorative panels for interiors with excellent acoustic and thermal insulation performance – have just reached the European market. The products come from the experimental research program The Growing Lab-Mycelia, in collaboration with Utrecht Universiteit, Stimuleringsfonds Creatieve Industrie and Stichting Doen, which develops mycelium cultures: since the material has a dense, stringy cellular structure, it can grow on different substrates, enhancing its properties.

Depending on the species and its growth parameters, materials can be developed for greater strength, elasticity, thickness or waterproofing properties. The experimentation also sets out to demonstrate that synthetic materials like plastic can be replaced with 100% natural substances that are completely compostable.

Technological progress allows man to design the material itself, even if it is organic. This is the approach in the projects of the Dutch designer Laura Lynn Jansen and her French colleague Thomas Vailly. The duo, graduates of Design Academy Eindhoven, have studied the geological process of sedimentation of extinct volcanoes in Auvergne, France, a region that has thermal-mineral springs.

Artificially replicating this process on a 3D printed structure, the two designers are able to make something like stalagmites in just a few weeks. Just as Jansen and Vailly design the growth of stone in a give form, so Mathias Bengtsson cultivates it.

The table with its extraordinary organic form does not imitate nature, it tames it. This is not a work of skilled craftsmanship, in fact. With an innovative computer-aided design technology and techniques of genetic modification of the seed, Bengtsson has channeled the growth of the walnut plant into the pieces of solid wood that make up the table.