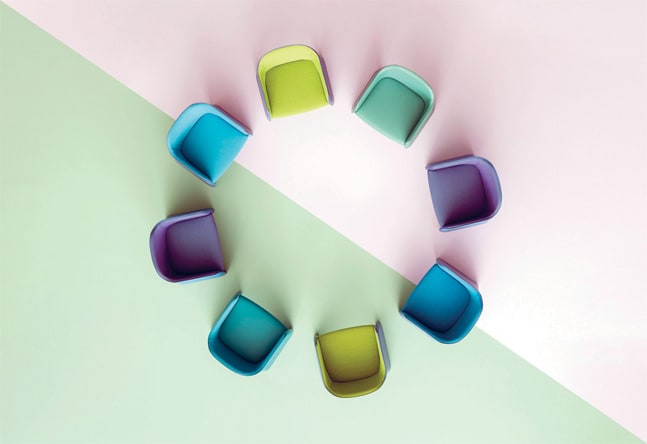 “My one-year-old daughter thinks a magazine is an iPad that doesn’t work.” So says a father who filmed his daughter as she was trying, without success, to scroll through images on the page of a magazine as if it were a touchscreen.

The video, seen on Youtube, was an immediate hit among experts on advanced interfaces, because it clearly shows how new media are rewiring the cognitive structures of digital natives, along with the rest of us. The habit of interacting with images is become the new visual standard, and the figurative efforts of traditional media are increasingly perceived as something inert and ‘obtuse.’ The little girl’s disappointment is eloquent. In her world, which is already ours, we expect images to be sensitive to the touch, and if they do not react it means they are ‘broken.’ This new visual conception leads to an aesthetic made of ‘graphic’ blocks placed on the same plane as material reality, characterized by a paratactic relationship between materic components and elements of pastel color defined with vectorial clarity, placed inside compositional peer relationships. An emblematic case is that of the new Pedrali products, like the Laja seat designed by Alessandro Busana. In the Beaver ceramic candle holder by Odoardo Fioravanti for Something Good and the Sucabaruca coffee set in wood and ceramic by Luca Nichetto for Mjölk, which combines the Scandinavian ritual of filtered coffee with the Italian cult of the ‘moca’ coffeepot, we can glimpse the same sense of ‘solid graphics.’ Graphic features are combined, on the other hand, with the gentle materic nature of wood in the Slope lamps in solid wood and metal by Skrivo for Miniforms, and the Tandem furnishings in oak and painted wood by the French studio Numéro 111 for Galerie Gosserez, as well as the Imboh accessorized upholstered furnishings in ecosustainable materials created by JoeVelluto for Designbottega. The language of the graphic solid extends beyond the furnishings sector. Living at the crossroads of the two-dimensional and the three-dimensional, by nature it tends to spread across visual culture, all the way to fashion and visual communication. An interesting example from the first field is that of the capsule collection 2Y by the pattern and fashion designer Yulia Yadryshnikova, made by starting with the cover for the Stanley sofa by Luca Nichetto for De La Espada. While in the field of the visual arts the photographer Tingting Wang shows the accessories of the brand Qi Hu inside a set in which graphic blocks are superimposed on the features of a model. Even packaging makes use of the tangible graphic aesthetic, with results of great refinement like the Mme KIKI chocolate package by the Japanese designer Yuma Harada, art director of UMA design firm. In general, two major cultural magnets feed energy to contemporary design: the digital disappearance of things, on the one hand, and a return to experiential solidity on the other. Since these are two macro-trends, the formal results of these attractors are numerous and diversified. The case of real graphics is a particular one, however, because it intercepts a point of convergence between these opposing tensions, grasping both the sense of impalpability of digital perceptive performance and the return to sensorial tangibility of things. It is precisely in this amalgam that the language finds its semantic force and its great aesthetic versatility, as well as its popularity. What makes a design language ‘convincing’ is not just its formal resolution (which is nevertheless necessary, and present in this case as well) but also the pertinence with which it manages to become the expression of a living, deep and timely cultural sensibility, nourished by the tension between present and future – between what we are and what we are becoming.