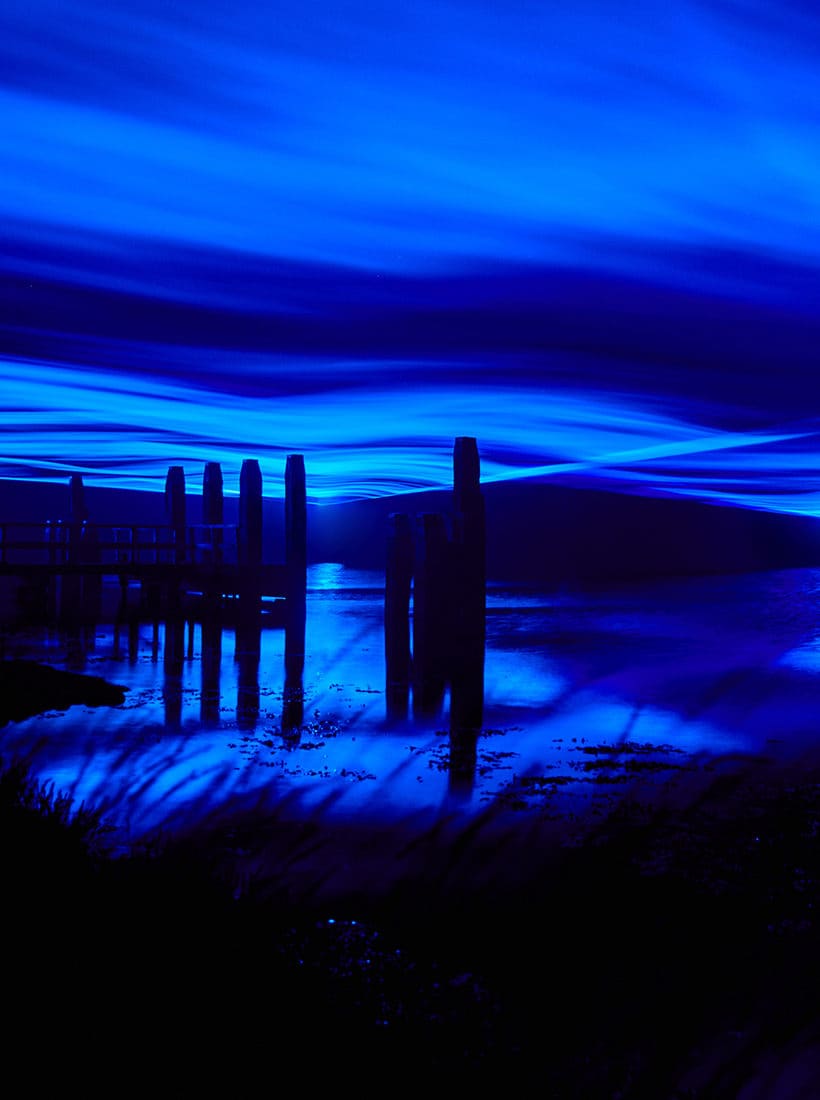 The capacity of objects to be intelligent, to respond to environmental stimuli and interact with man in a ‘multidirectional’ way is already reality. Complex systems in which the designer has to not only reinterpret traditional typologies and disciplinary subdivisions, but also and above all work on a higher level: that of language and experience, of tangible things that give substance to immaterial things.

We are in the photonic revolution in which photons, besides bringing light, are the bearers of bits that translate into data; in which the ecosystem around us becomes part of the functional algorithms of the machine. Biological and biomechanical processes of nature become sources of design inspiration, like the concept of ‘energy-neutral’ things, or systems that transform energy to the point of making the computation equal to zero. These are the new objectives of interaction design.

Visionary Dutch designer Daan Roosegaarde has always been interested in light, not so much as an object, but as behavior, a tool of interaction. He recently presented a project for Afsluitdijk, the main Dutch dike with a length of 32 km, which will be restored at the cost of 800 million euros over a span of 15 years.

Roosegaarde, starting in 2017, will make two permanent projects – one at the entrance and the exit of the dike (Gates of Light), at the position of the bastions built in the 1930s, and one at the center of the long vehicle route (Line of Light) – as well as three temporary installations: Waterlicht, which simulates the effect of the rising tide; Glowing Nature, at the position of the bunkers of World War II, which creates effects of light using a colony of real luminescent algae; and Windvogel, which realizes the dream of the Dutch astronaut Wubbo Ockels, who wanted to transform the kinetic energy of kites into light.

“We want to revitalize the dike,” Roosegaarde says, “not only from a technological standpoint, but also as an experience, raising awareness of the characteristics of the place. Our projects shed light on historic presences and the dimensions of water and flooding typical of Holland. We also want to be ‘energy-neutral’: for the permanent installations – Gates of Light and Line of Light – we are developing special technology to stand up to the problematic local climate, not using electrical energy and reflecting the light of the cars in transit to light up the road and the monuments. Lighting is used only where needed, without waste, without interfering with the ecosystem.

The temporary installations have the shared theme of interaction between man and the environment through light. Which is communication and language, not just decoration or mere function. With Emeco we are working on collaboration that does not lead to products, but to the use of light to improve the experience of public space.”

And what happens if machines are controlled by plants? This is the provocative question raised by Hortum Machina B, the functioning prototype of a geodesic dome driven by the sensations of plants, which react to environmental stimuli to move a mechanical system that makes the structure roll.

“We started with the thinking of the visionary architect and inventor Richard Buckminster Fuller,” says Ruairi Glynn, director of the Interactive Architecture Lab (IALab) of the Bartlett School of Architecture in London, who made the machine, “who said that the time had come to take care of people and the planet on a higher level, converting the high technology of weapons into technology for life. At IALab we conduct research on ecological models for habitat systems and their interaction in a cybernetic dimension; we also investigate how electrophysiological stimuli like light and sound can activate robotic systems. We look at how the synthetic dimension can have a sympathetic relationship with the natural one.

Hortum Machina B is on the borderline between living and non-living. The prototype will be developed further with an American research group focusing on urban ecology. But it can also have applications in everyday life, in devices in which plants activate electrical or digital equipment in certain environmental conditions; or in architecture, with mechanisms that modify facades or spaces, controlling ventilation or sunlight. There is a whole new discipline around self-learning systems for machines, calling for a type of design based on perspectives of evolution and adaptation.”

The German duo Reed Kram and Clemens Weisshaar, for the last iteration of CeBit, made the interactive installation Robochop, which allows anyone, in any place, to control a giant mechanical robot and make it produce an object through morphing software.

“Robochop,” Kram and Weisshaar explain, “involves advanced robotics, cloud computing and software that handles all the aspects of the production process, from design to production engineering to logistics. It is a technological demonstration of industry 4.0 that connects humans and robots by means of a intelligent digital interfaces.

The technological revolution has to be balanced by a human touch, to avoid chaos and destruction. By 2020 we will see driverless vehicles and artificial intelligences that make decisions. And the treatment of ‘big data’ on the medical front will transform health care systems. Companies will have to adapt to industry 4.0 or cease to exist.”

With a very futuristic project, Carlo Ratti applies IoT in the offices of Fondazione Agnelli in Turin. Software for smart devices will let people personalize the thermal bubble over their workstations, while energy synchronization of the system, in relation to effective use of spaces, will lead to savings of resources of up to 40%.

“We are entering the era of ‘calm technology’ as described by the great computer scientist Mark Weiser,” Ratti says, “a technology so rooted in the space we inhabit as to finally blend into the background of our lives, as an omnipresent but discreet factor. The opportunities and applications are many, and as yet unexplored.

The objective for us designers is to make the new technologies offer users the chance to gain new awareness of the environment, playing an active role in creative and productive processes, addressing the management of urban space to influence every part of everyday life.”