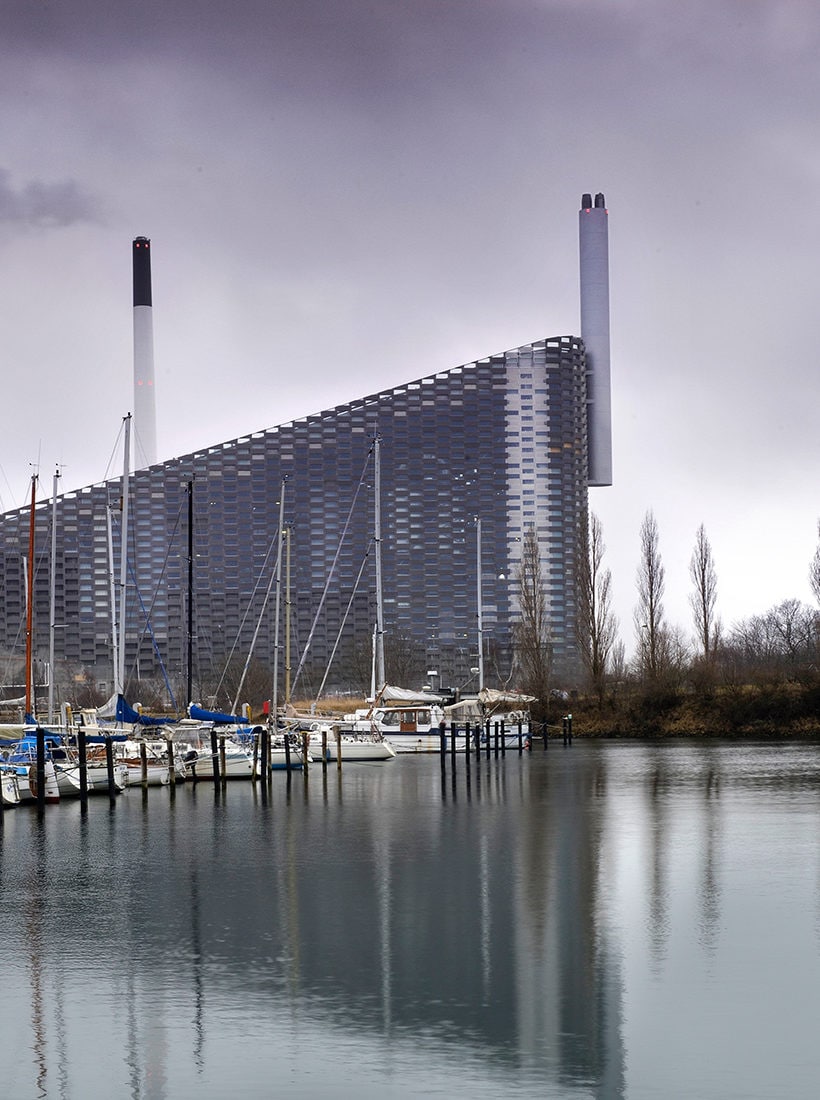 Some background info: 500 meters of ski and snowboard trails, a wall with a height of 90 meters for climbing (the tallest ever built), dozens of paths for hiking and a refuge-restaurant at an altitude of 100 meters.

We are not talking about a mountain resort of the future, but the Amager Resource Center (ARC) in Copenhagen, the first waste-to-energy plant in the world design to also become a multifunctional recreation center open to the city.

The (visionary) idea of enjoying sports on an incinerator came from the Danish studio Big: almost 300 architects, with offices in Copenhagen and New York, who are making buildings of great impact and visibility around the world. But for ‘his’ town of Copenhagen, Bjarke Ingels, founder and leader of the studio, has created one of his most futuristic projects. Here’s our exclusive interview.

Years ago, in your ‘Yes is more’ manifesto, you introduced a kind of Darwinian concept of architecture: as life evolves, you said, our cities and our architecture need to evolve with it. You urged architects to embrace innovation, to be ‘pragmatic utopians.’ How do you apply this mantra in your work and which are the traditional models that in your view are no longer fit for our changing environment?
When we say “Yes is more” we are arguing for a break from the architect as the exclusive taste judge, moving instead towards architecture as the art of inclusion of multiple inputs from all aspects of society. We apply this mantra to our work by saying “yes” to the program requirements, the budget constraints, the legal limitations and the structural boundaries, the complaints of the neighbors, and the concerns for the climate.
When you say “yes” to these perceived challenges, you open doors and make way for ideas that bring forth possibilities you may never have imagined in the first place. To further that, we believe that design decisions should not be made out of the blue or based on stylistic obsessions or rules, but rather on the basis of knowledge and observation. Given the nature of our changing environment, the location, the climate, the building regulations, the social environment and what you want to make out of it all play an important part.
So the traditional notion of having ‘ideological confines’ that don’t work with these ideas would yield disappointing results for everyone. I don’t believe in rules, in a defining style that is in some ways the sum of all your inhibitions.

Your Amager Resource Center which is about to be completed in Copenhagen is a great example of innovative thinking. In fact no one would expect a waste-to-energy plant to be turned into a sort of mountain integrating a sky slope and a rock-climbing wall available for citizens. How did such an extraordinary idea come up in your studio?
This building transforms all the trash of the Copenhageners into electricity and heating – it’s going to be not only the tallest, but also the biggest building in Copenhagen. We thought that since Copenhagen actually has the climate but not the topography for skiing, we could provide the people of the city with a man-made mountain that transforms the cold and snowy but flat Copenhagen into a real Alpine man-made skiing resort.
It is, to date, the closest thing we have achieved in realizing the vision of designing our cities and buildings as man-made ecosystems. Because not only does the waste-to-energy plant harvest local resources – rainwater, sunlight, natural air flows – it also forms an urban metabolism with the city of Copenhagen, converting its waste into a rich energy reserve. It’s a perfect example of what we call hedonistic sustainability.

ARC is expected to open within this year, but it’s already an impressive presence in the Copenhagen skyline. Can you give us some details on how this building will operate both as a plant and as an amusement and sport center?
The ARC will operate as one of the cleanest waste-to-energy power plants in the world, and as a groundbreaking, multifunctional industrial building. Roughly half of the space in the plant is spent on cleaning the smoke, extracting resources and scrubbing CO2.
Machinery inside the plant is organized by volume, from tallest to shortest, while the exterior traces its silhouette to create an efficient envelope that also serves as 400m of ski terrain. The rooftop ski slope is accompanied by a real mountain with forest areas, hiking trails and climbing walls, and designated green areas can be used for resting, walking, running, and other mountain activities.
As the largest and tallest structure in all of Copenhagen, the slopes provide skiers, hikers, and visitors with spectacular views of the city skyline. Meanwhile, its 90-meter climbing wall – the tallest in the world – is built into the very surface of the building. This is the essence of hedonistic sustainability – you can make the world cleaner and more fun at the same time!

You work with 12 partners and around 300 architects, designers, builders and thinkers, located both in Copenhagen and New York: how can such a large and complex organization be so creative, in such a variety of projects? What is the recipe of BIG studio for success and innovation?
One of the important things about creating an office is that you have the opportunity and the responsibility to create the environment that you would like to work in. At BIG, it’s this accumulation of culture within the office that ensures continuity. Even though we’re growing, we’re all getting busier, and traveling more and more, I still think the work we do as an office gets better all the time, and that is simply because we’re not just making projects and building buildings, we’re really building an architecture office.

One personal question. Imagine you had not become an architect: what else would you have liked to be?
I wanted to become a graphic novelist – but because there wasn’t a comic book university, I enrolled at the Royal Art Academy’s Architecture School. I did this to enhance my drawing skills to eventually apply them to comic books, which is where I wanted to be. But after two years of freehand drawing and technical classes I became exposed to architecture and got intrigued by it.