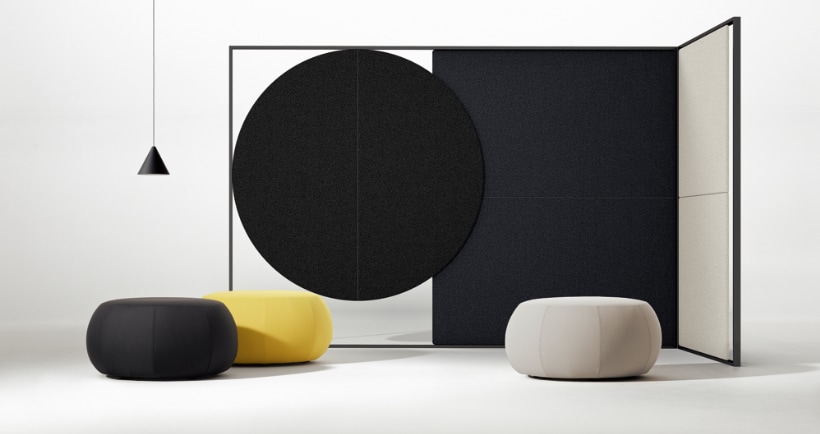 Lately we are seeing many contract projects, especially for the office, that make use of new aesthetic codes borrowed from the home. This is a wide-ranging trend that reflects a general evolution in our way of thinking about work.

From an activity limited to definite spaces and times, work has become a nebulous flux that mixes with the equally muddled flow of private life, through networking technologies that make it possible to do all kinds of activities from remote locations and at flexible times.

So it should come as no surprise that design is hard at work to give concrete form to this atomized sprawl of life and work, by adopting aesthetic solutions that constitute the response of domestic existence to the digital transformation of everyday life.

The same oversized volumes, the same exact and minimal signs, the same soft and reassuring colors with which designers have been packing fairs and showrooms for the home are now also seen in the design of office furnishings, like the freestanding Parentesit divider by Lievore Altherr Molina for Arper, based on the two-dimensional geometry of traditional Japanese interiors.

Or the Focus textile separator produced by the Swedish firm ZilenZio and designed by the studio Note to offer professionals in the digital age the possibility of create a bubble of peace and quiet wherever they go: an idea hatched, as the designers explain, “from our experience as designers and nomads who have to work in hotels or cafes, where we often have the sensation that people need something to help them to create a personal space.”

This is precisely the point: since there is less division between the personal and professional spheres, between public and private time, what digital nomads need is a gentle, widespread infrastructure that guarantees a stable wi-fi signal and the constant aroma of coffee, wherever they are, whatever they’re doing.

This is the reality addressed by the new contract creations, in solutions like the sound-absorbing BuzziBlinds dividers by Alain Gilles for BuzziSpace, for a light, rhythmical atmosphere, ductile but not distracting, ready for work time but also, ideally, for private life in the digital nomad mode.

We are no longer just at work, just as we are no longer just at home. It is an epochal change: that mobile metropolitan condition described by Andrea Branzi in La casa calda, coinciding with the social flow of goods, has now entered a new ethereal dimension in which social and professional flows are distributed along the paths of the web, where everyone swims on his own though in constant connection to others.

Contract, finding itself at the center of this change, is destined to take on an increasingly incisive role in the development of new design languages, to the extent that it is able to grasp the needs of new professional situations (especially the digital service industries), alongside the need for an “agile” domesticity ready for interpretation, not necessarily connected to the home but in continuous transition from living to coworking, residence to Internet cafe, office to hotel lounge or airport.

This is the vaporous context for a proposal like the AK 2 ceiling lamp by Uli Budde & Ivan Kasner for De Vorm, a wooly thing that descends from on high to indicate a proxemics of airy, suspended work. Or the Eva divider in the form of a leaf by the Spanish Muka Design Lab, seen at the latest Salone Satellite in Milan.

The graphic elegance of the set of furnishing elements Moving Tatamis by José Lévy for Daiken, inspired by traditional Japanese furniture, fits perfectly with the contract cases described above. Besides not being a coincidence, this is also very symptomatic.

As the distinction blurs between private life and work, so do the aesthetic boundaries between design areas, which in contract and domestic applications, products and visuals, all feature the same pastel colors, the same precise radial systems, the same clean anatomical forms, summoned to make material sense of all-encompassing connectivity.