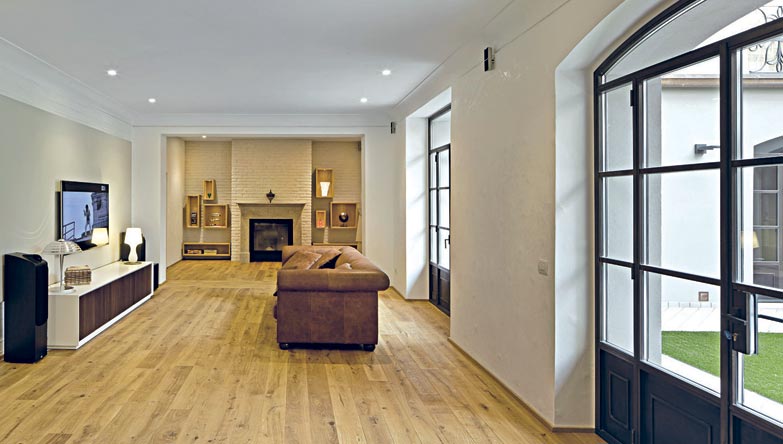 The house on the patio

The house on the patio

“A young couple, she’s a psychologist, he’s a businessman: they asked me to design their house.

So in an exercise of psychological introspection, it was fun to discover what they thought, the differences between them and me when I was their age, in the same position of trying to understand how to ‘spend’ my life.” Michele De Lucchi, who needs no introduction on the international design scene, tried out some random flashbacks on the theme: “The memory of the 19th-century farm in Busseto where Giuseppe Verdi was born, the set for the film Novecento by Bertolucci. The interiors I lived in, all with the presence of a loggia – in Vicenza as a kid visiting my grandparents, in Padua with my parents, in Angera today – a figure I have reprised as a design feature at Palazzo Litta and in the projects in Georgia. I started from here,” De Lucchi explains, “to organize the ‘time of life’ in a rugged pastry kitchen in the center of Milan, born in successive phases after the war on the ground floor of a turn-of-the-century building. It already displayed great potential, even in its chaotic, random state: there was the possibility of creating a private internal patio that would become the heart of the dwelling, faced by all the rooms, the pivot of the architectural composition. A center of gravity and relationships, also with nature, to stay in touch with the weather and to stimulate an extroverted, non-artificial dimension.” After the main entrance from the building’s courtyard, the rectangular ‘box’ pierced at the center by the secret courtyard has an immediately clear layout: the entrance is flanked by a guestroom and a studio zone, and leads to the central television room open on one side to the living area with fireplace, and on the other to the dining room (which communicates with the kitchen), marked by the presence of a linear, essential staircase in iron and wood that descends to a basement that contains the fitness zone and service spaces. Finally, the bedroom area features a master bedroom with two closets and a bath, and two more bedrooms that are connected, thanks to a corridor lined with bookcases, to the fireplace zone. “Working through addition of complete parts to form a whole,” De Lucchi continues, “I thought about the fact that control of the decisionmaking process is something you learn over time, so that it does not become something imposed by one party or the other. At the start of my career I would argue a lot with clients, and get upset. Maybe it’s the beard that helps, but I have developed the comforting awareness that all choices are, in any case, contingent, because they follow two main rules: they are derived from imagination, and related to the conditions of that moment, also in terms of certainties. You know that if you introduce elements that change the imagination you can reach other decisions. It is no coincidence that I have thought about the home of a couple with a life ahead of them, including two rooms for future children, since the house is large enough: 450 sq meters plus 75 sq meters of patio. Of course you have to gauge just how personal the project should become, precisely because the home is the stage on which we enact our existence. And if the stage is not suitable for the role we want to play, we will never like it or use it to the fullest.” For this generous, fertile project De Lucchi has created a sturdy frame, not just structurally reinforced by also made tangible, especially in the materials that convey a sense of durability, of things well made: larch wood for the floors, oak for the furnishings and internal doors, bronze for the casements. Each space, each presence takes part in the narration of a very strong, also inner solidity, respecting the spirit of the place and its most interesting aspects assumed over time. The windows and glass doors are arranged around the patio, new features with identical forms, but they start with an authentic element of reference, a segmental arch already existing at the site, reconstructed using traditional techniques. Likewise, the decorated metal railings of the upper loggia are based on an original model. They represent signs and signals of memory. Like the walls that combine lime plaster with the identity of exposed brick finished with the sagramatura technique, a coating to seal the crevices and prevent infiltration. For the internal doors, the oak and glass segments reflect an original design deployed in a contemporary way. In many of the spaces the ceilings feature the Sansovino system of wooden beams, a Lombard-Venetian legacy, alternating full and empty zones. Only in the paneling of the closets has the wood been treated, painted and combined with glass or mirrors, to expand the perception of the spaces and to add greater balance. “Wood is a beautiful material, it has formal and sentimental depth,” De Lucchi says, “but it should be carefully used to avoid the effect of a rustic mountain chalet.” The furnishings follow the same parameters of reference. A few selected pieces, a dining table with turned legs, lamps and objects designed by the architect placed in the niches of the bookcases. “There is a lot of the research I have conducted, after 1990, when I started Produzione Privata, one of those cases in which the word has driven the idea: the desire to experiment outside the system of the market, the catalogues of companies. Sottsass said: with Memphis industry is at the service of the designer, not vice versa. In my own way, I continue an idea of design that is increasingly tied to crafts, to traditional know-how and small numbers. Also in architecture, even when the suppliers are not the same, the guidelines, from the design system to the samples to the finished work, are always there.” This is why, in the end, this ‘soft’ home, free of ostentation, with a relaxing, quiet, almost suspended atmosphere, should age very well.