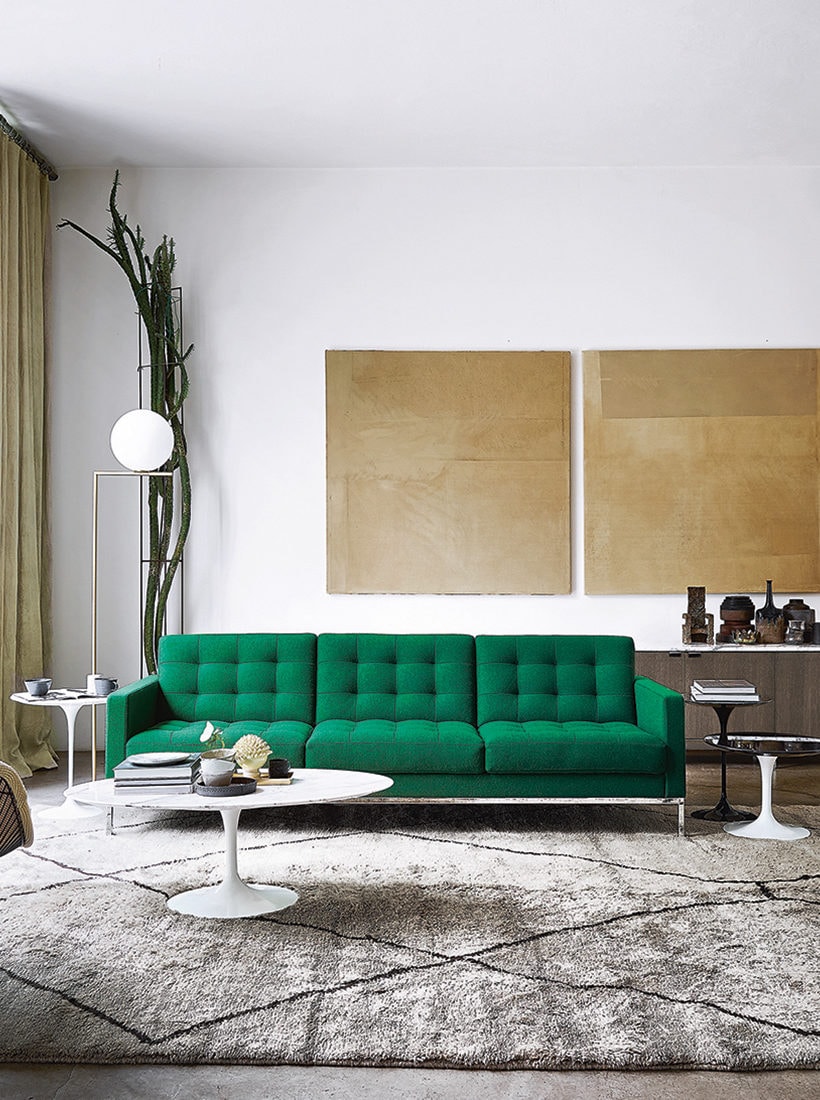 The Lesson of Florence Knoll

The Lesson of Florence Knoll

There are certain moments in history when everything seems to happen in unison, and the mere fact of being there projects things into an absolute dimension of visibility and interaction.

Florence Schust Knoll Bassett is a legend: she studied at all the most important architecture schools of the 1930s and 1940s, interacting with the great masters of the Modern Movement and growing together with the leading American exponents of her generation; she made Knoll into one of the leading furniture companies on the worldwide market, thanks to a truly pioneering vision; moreover, she created a catalogue that is like a textbook of design history.

With disarming modesty, her autobiographical writings describe the phases of a life that might seem like the product of a fervent literary imagination, were we not certain of its historical truth. The background story is like that of a superhero: Florence Schust was left without a father at a very early age, and lost her mother as well when she was just 12 years old. When her legal guardian set out to provide for her education, as stipulated in her inheritance, she advanced just one very clear request, a sort of premonition: she wanted to study architecture.

The school chosen for her was Kingswood College at Cranbrook, Michigan. Its president was Eliel Saarinen, the most important Finnish architect, who had set up a new campus, responding to the invitation of an influential local publisher and moving there with his wife Loja, a sculptress and fabric designer, and his son Eero. After a few years Florence’s talent came to the fore, and the Saarinen family welcomed her into their lives, practically adopting her.

They took her with them on vacation in Europe, in the house at Hvitträsk, a gathering place for the greats of Scandinavian culture, from Alvar Aalto to Gustav Mahler. After high school, Saarinen the elder urged Florence to enroll at the Cranbrook Academy of Art, which in the meantime had become the most brilliant school of its kind in the United States, attended by the best and the brightest youth, from Eero Saarinen to Charles Eames, from Ray Kaiser (the future Mrs. Eames) to Harry Bertoia.

The ties between Florence and the Saarinen family became even more intense: Eliel and Loja were like her parents, and she describes Eero as a big brother. In 1935 Loja designed a dress for her, with the same passion a mother puts into making something for her daughter. But Loja was also an artist: the dress was a collage, where the features of the figure are directly cut into the material.

A technique of representation that seems to come straight from the Bauhaus, and can be seen a few years later in Florence’s sketches. After the Academy, Aalto and Saarinen steered her towards the Architectural Association in London. But soon thereafter, due to the outbreak of World War II, she had to return to the States and became the apprentice of Marcel Breuer and Walter Gropius, and then a student at the Illinois Institute of Technology, under the man who was to be her greatest influence: Ludwig Mies van der Rohe.

At this point the pantheon of the Bauhaus is complete, as was her education; the young student was ready to enter the world of work. This was the moment of the most important encounter of her life, with Hans Knoll, a young German immigrant who owned a furniture company, which he was planning to develop in America. For this mission, young Florence became his finest ally, as well as a life companion.

The ambitious but logical idea was to bring the design culture of the International Style into the world of habitation. This was the dawn of a new humanism, which counted the mediation between art and technology as one of its fundamental concerns. Hans and Shu – as they were known to all their friends and collaborators – had a lot in common: both nurtured a deep intellectual passion for the legacy of the Bauhaus; they wanted to bring new design to a wider audience of users; they believed good design could be a way to cultivate talent while at the same time offering quality.

These affinities were joined by a rare talent for business, on Hans’s part, and the design vision of Shu, whose last ambition was to become a “decorator” – the usual destiny for a woman in the sector in those days. She glimpsed the fact that the world of the office had the potential to become the ideal representation of her idea of inhabitable space.

It is the place of enterprise, brilliance, effort and labor, of the discipline that drives quality. It was the mirror of the American efficiency she wanted not only to safeguard but also to augment through Good Design. But she was also aware of the fact that the office is a space of remarkable symbolic content, a space that narrates the character of its inhabitant in an empathetic way.

So her interpretation of the office became holistic: not just a pragmatic organization of workspaces, but also a lifestyle, a philosophy translated into environments. The tools for the achievement of all this were already in the hands of Shu and of the orchestra she and Hans put together over time: rational layout of spaces; choice of materials and colors in tune with the dictates of Gestalt, the psychology of form; coexistence of sculptural furnishings and their accompaniment (what she ironically called “meat and potatoes”).

For these two categories, Shu knew precisely whom to get involved. For the accent pieces, she called on the greatest masters of the past and present: she convinced Mies van der Rohe, her mentor, to provide masterpieces like the Barcelona from 1929 for her catalogue; her “brother” Eero Saarinen created continuous, sinuous furnishings for her, from the Womb to the famous Tulip series; her friend Isamu Noguchi, together with George Nakashima, connected western culture with oriental sensibilities; the sculptor of metals and her classmate at Cranbrook Harry Bertoia, with the maximum freedom offered by Knoll, created a milestone of design, the Diamond Chair.

The catalogue reflects an international dimension of great breadth, making it possible to involve talents like the Italian designer Franco Albini, or the French designer André Dupré. And around this orchestra of stars, Shu made the best of scores, a perfect musical staff on which to array their finest notes. She though up pieces that would connect, and would function to perfection. She learned the lesson of simplicity, reduction, the hardest of all because it means coming to grips with one’s own ego. But she had learned it from Mies, the man who was to reverse the terms of the striving of the auteur, with his “less is more.”

Mrs. Knoll managed to put all this into her project, while at the same time applying management techniques that blazed new trails for the running of the company. Starting with the creation of the Planning Unit, a department organized to design spaces, which generated a Copernican revolution. The message to the end user was unavoidably clear: at Knoll not only will you find beautiful furniture for your project… you will also find the project itself, for a space you didn’t even imagine could exist.

To narrate this approach the designer got away from plans and sections – technical materials that are impressive but not convincing – and approached her clients with eloquent, intuitive models, colorful drawings, collages where the volumes of the furnishings were directly cut out of their constituent materials (a recollection of the collage of the dress made by Loja?).

The spaces are sober, well balanced, perfectly proportioned. They are always enlivened by the presence of plants, fresh flowers, personal objects that add a human touch and temper the cold pragmatism of efficiency in uniform. Florence designs for people, not for sterile architectural manifestos. One image shows her during one of the board meetings for the presentation of a particularly complex project, the offices for the Connecticut General Life Insurance Company in 1953.

The room is packed with managers; she is the only woman present. They are all more or less engaged in a discussion, but she is the only one who does not look at the others, intent upon setting up her project model. She handles it lovingly, with respect. It is the meaning of her work. Just as she put care and love into the project for Hans’s studio, in 1951.

Here the dark wall at the back and the golden curtain were chosen by her to highlight the blond hair and light complexion of her husband. It is not indulgence, it is attention, two things that are always clearly separate in her lucid vision.

In 1955 Hans suddenly passed away in an automobile accident, during a business trip to Cuba. Shu became the CEO of Knoll. In one of the many comforting letters she received during those months, the designer Alexandre Girard expresses his condolences after the tragedy, but then quickly shifts to discussion of an encounter with an important client. Behind that indubitable coldness, there is recognition and encouragement of a new role: now Florence is the boss.

For ten years, from 1955 to 1965, she would be at the helm of the firm, keeping it at the height of an international success that by then was not just in the name, but in the very DNA of Knoll International. Charles Eames, her classmate at Cranbrook, wrote to her in 1957: “I feel grateful to you for doing such work in a world where mediocrity is the norm.” Remarkable words of praise, considering the fact that Eames was not just an old friend, but also a competitor.

In 1965, upon the completion of one of her most extensive projects (the interiors of the CBS tower, with architectural design by Eero Saarinen), she resigned from her position. She was just 48 years old, at the apex of her career, having designed interiors for the leading centers of intellectual, political and economic power of the world.

She had known how to establish a dialogue with the greatest designers of her time, opened showrooms in the major capitals of the planet, created timeless icons and important, close collaborations (such as the one in Italy with Dino Gavina, for example). It would be hard to achieve more in her profession.

She retired to private life, in Florida, along with her second husband, Harry Hood Bassett. She walked out of the spotlight at a high point, but without nurturing legends: she was not playing the role of the “Salinger of design.” With great conviction and composure, she continued to work as a consultant at Knoll, but with the deepest respect for those who came after her at its helm. As we read her story, we like to think of this as a form of altruism, given back to the life that was so generous in her regard. An admirable lesson, and one that merits being passed on.