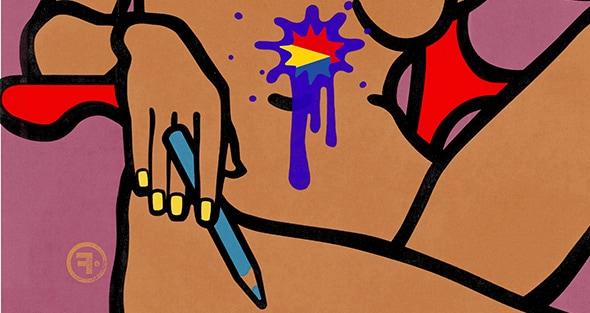 A Tuscan painter and illustrator, trained at the Fine Arts Academy of Florence, Sandro Fabbri lives and works in Milan, where his creations are permanently on view in Room Mate Giulia, the very central hotel designed by Patricia Urquiola.

He has worked for many years with the Italian and international publishing houses (Mondadori, RCS, L’Espresso, Hearst, Condé Nast, Il Sole 24Ore), as well as in the fields of fashion (Missoni, Etro, Cucinelli, Benetton, Coin) and advertising (Nestlé, Mercedes, Migros).

Fabbri has also developed an approach in which he expresses his own ‘freer’ side, as in the art book Ordinary People, assigned a prize by the Italian Art Directors Club. In drawings, ink works and watercolors, Fabbri represents his recurring themes: roots, solitude, love, thought, the unconscious, lightness and fragility, which on paper take the form of stylized, poetic and symbolic but also often ironic figures, alongside flowers, animals and landscapes that are more inner than real.

Fluid brushstrokes and cascades of colors that expand, capturing the imagination of the observer, or immediate, essential signs, without fear of the void. Paper, pen and ink, pigments and brushes – at times even with tea and coffee – Sandro Fabbri outlines his artistic imaginary, ranging from large works to small, playful, amusing sketches, all the way to the series of artist’s books, unique and original pieces.

A style that establishes a perfect dialogue with design: in 2016 Sandro Fabbri created the graphic image of the Superdesign Show at Superstudio Più, during Milan Design Week; previously, he took part in the project Fabriano ospita and showed works in various locations in Milan, Florence and Zurich. A selection of his works is contained in the art book A Secret Adagio (available from Armani Libri or at the website www.sandrofabbri.it).

François Berthoud came to Milan at an early age, and “found success.” Then, in 2007 he returned to his native Switzerland, setting up a studio in Zurich, where he has created the second cover of Interni in 2017.

Swiss, after taking a degree in 1982 at the Institute for Graphic Design of Lausanne, François  Berthoud moved to Milan, where he drew comic strips for Linus and Alter-Alter.

His first fashion illustrations were commissioned by the journalist and style icon Anna Piaggi, who wrote: “François seems to illustrate fashion with a style that is only apparently formal and decorative, but actually deeply analyzes the subject, with an elegant kind of detachment.He approaches fashion with a cutting sense of humor and a visual culture that has deep roots in Conceptual Art.”With such a mentor, Berthoud’s work ‘took off,’ and he has done illustrations for many fashion and lifestyle magazines – including Vanity, Vogue, Numero, Interview.

Today Berthoud is internationally recognized as one of the most original illustrators in this sector, working as an art director all over the world, producing drawings of women with a clear, precise touch, filled with latent eroticism.