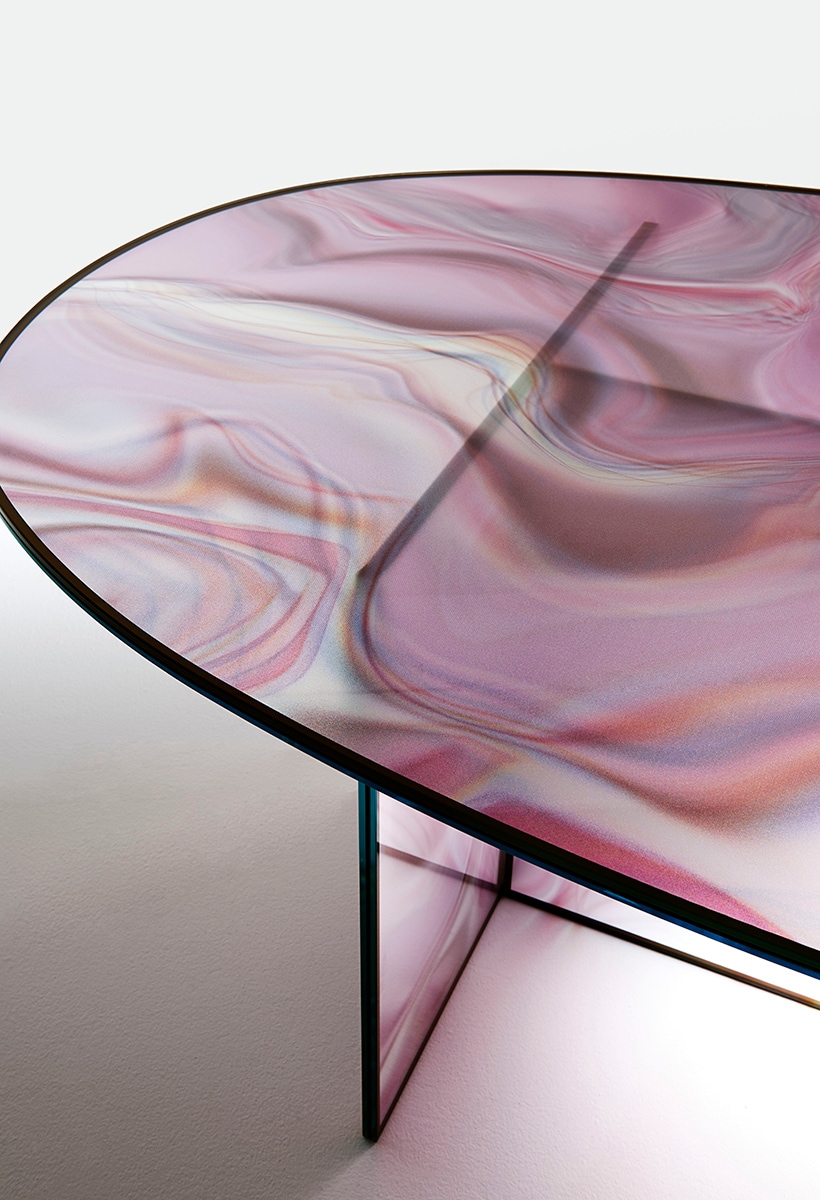 The concept of the ‘Anthropocene’ or the geological era marked by the impact of human action on the earth prompts design to think about its meaning, and the need for a new kind of aesthetic education

One of the most ancient myths of our tradition tells of the marriage of sky and earth, during which the sky gives the earth a veil that grants her a face, defining the profile where previously there was only Chthon, the faceless abyss. Since the dawn of the western world this has been the guiding metaphor of design action, conceived as the baptismal attribution of a form to a matter that would otherwise remain dark and impossible to decipher. Today, however, things are changing.

Human intervention on the planet has reached the point where the old mythology no longer applies, disrupting the eternal dichotomies – earth and sky, nature and culture, abyss and project – which for thousands of years have defined the role of human beings on earth. Today everything is fused, remixed.

And this is the meaning of the lively focus on the theme of the Anthropocene, the geological era in which, according to growing numbers of scholars, we have entered as a result of human interference with the planet. Now geology concentrates on rocks, objects that are formed through processes that take hundreds of millions of years. 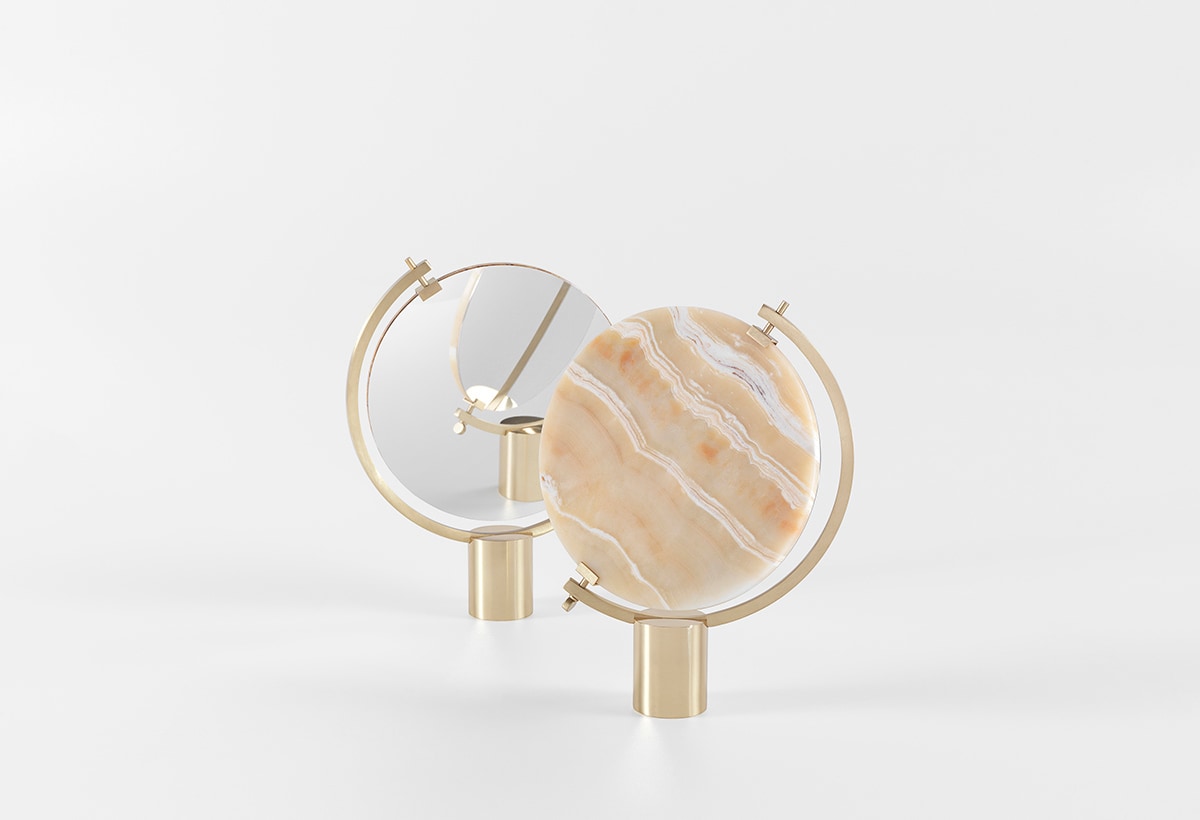 6
Naia table mirror designed by CtrlZak for JCP, evoking the magmatic pattern of age-old storms on the surface of Jupiter. Cylindrical base in matte brass and mirror-finish steel, on veined marble surface. Photo: Silvio Macchi.

On a geological scale, the entire existence of the human race, from the first homo habilis to today’s sapiens, is but the blink of an eye. Can such an ephemeral phenomenon as the human being leave such an incisive mark on the body of the planet?

It would seem that the answer is yes, if we observe the disquieting ‘plastiglomerates’ gathered by the Canadian artist Kelly Jazvac in Hawaii, stones containing mixtures of natural debris and hardened plastic seen by some as a marker of the start of the Anthropocene. In the plastiglomerate the plastic and rock components are mixed so closely together that they are impossible to separate. Beyond the physical appearance, this calls a philosophical issue into play. In the plastiglomerate, in fact, we are no longer looking at two distinct substances, one artificial, the other natural, but at a single new substance that puts us directly into a new cosmogony, a new ‘background’ of reference for the human.

The fusion of natural and artificial is effectively much more sinister than people usually imagine (and imagining that the practice of recycling can re-establish order on its own seems very naive indeed). If we consider, for example, how the microplastics, corpuscles of the size of about one thousandth of a millimeter, enter the food chain of living beings, including our own. The veil the sky once gave to the earth is no longer just the design of a face. The ‘design’ is penetrating into the body of the earth, fusing with its abysmal depths, modifying its DNA.

“
Today everything is fused, remixed. And this is the meaning of the lively focus on the theme of the Anthropocene, the geological era in which, according to growing numbers of scholars, we have entered as a result of human interference with the planet. "

From a certain standpoint it is paradoxical that a material like plastic, employed almost always for a use that lasts but a few minutes (bowl and utensils for a quick salad at lunch), can be able to modify the ancient structure, the future over the long term, of the planet. Yet that is precisely what is happening. The ephemeral eternity of plastic, with its breakdown times of thousands of years, melds with the deep time of the planet, causing a short circuit in the geological temporality that shapes the world. The result is ‘broken’ nature.

What becomes of design in this scenario? No longer the simple assignment of form to matter, design will be increasingly the ‘design of the blend,’ a morphological working of a new magma that is plastic and rocky at the same time, malleable and insidious, useful and dangerous. A mixture of earth and sky that will no longer define a solid past on which to place human culture, but a ductile present without any stable supports. Various projects are starting to explore the behavior – philosophical more than technological – of this new magma.

As in the case of the objects of Alexander Schul, made in recycled plastic but with a design of rational (non-pop) inspiration that we are accustomed to seeing as noble and ‘timeless,’ challenging the falsely fleeting perception we have of the survival of plastic. Likewise, Moreno Schweikle, in the Oesis water dispenser, combines the aesthetic of granulated plastic with that of neoclassical fountains. 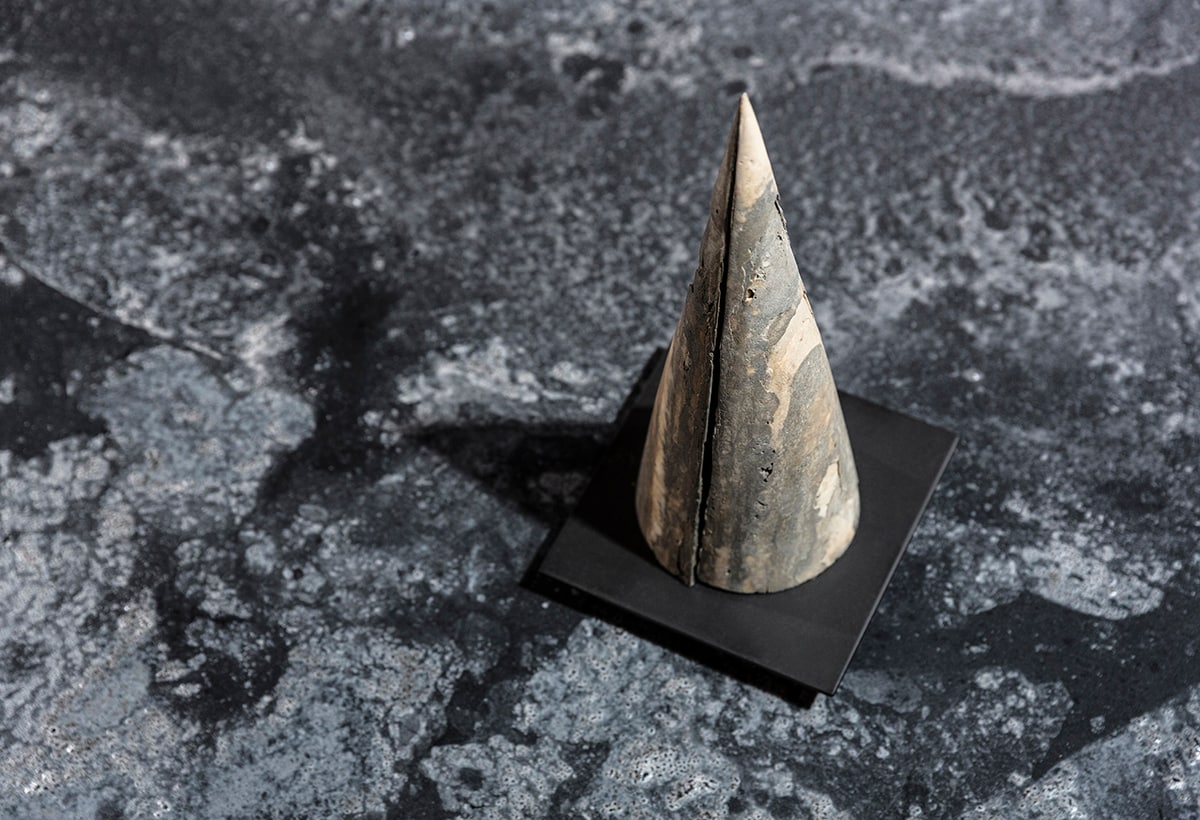 5
Mourn, a project by Studio Nienke Hoogvliet, a cremation urn in bioplastic, made to slowly disintegrate in the environment, gradually releasing the ashes of the deceased to favor correct nourishment of the land. Photo: Femke Poort.

Design is in fact not only the pursuit of practical solutions but also a matter of aesthetic education, a new culture of beauty, to make a visual horizon compatible with the time in which we live become acceptable and even desirable. So the objects in sand of Fernando Mastrangelo and the Liquify table by Patricia Urquiola for Glass Italia incorporate the fluid taste of the lavic landscape in the ornamental stasis of furniture.

In this sense, and out of metaphor, it is equally interesting to observe that two brands – the Latvian Laviture and the Danish Unknown Furniture – make use of real lava in their outdoor proposals, the sign of a shift of taste towards object-bodies in morphological continuity with the processes that shape the planet.

More articulate thinking lies behind the Mourn project by Studio Nienke Hoogvliet, a cremation urn in bioplastic, made to decay slowly in the environment, so as to gradually release the ashes of the deceased, full of toxic and nutritional substances.

“
On a geological scale, the entire existence of the human race, from the first homo habilis to today’s sapiens, is but the blink of an eye. Can such an ephemeral phenomenon as the human being leave such an incisive mark on the body of the planet? "

A more controversial interpretation of the new magma comes from CtrlZak, which in the Naia mirror for JCP revives the archaic symbolism buried under layers of sedimentation and civilization, reactivated to circulate once more in the new tectonic plates of the Anthropocene. As we should remember, Chthon has the terrifying appearance of facelessness, as mysterious as the meaning of life of the planet, which in the end couldn’t care less whether or not mankind finds a way to survive. The earth exists and it will continue to exist, in any case. What gets ‘broken’ then, rather than nature, is culture. Human technologies and symbolisms are no longer sustainable.

In this sense, the Guilty Pleasure mirror by Siri Bahlenberg seems poetic, beautiful, definitive, a perfect object that combines the terrestrial rock and the heavenly mirror in a furnishing proposal that is ideal for a contemporary living room or a clearing in the virgin forest. Or a Martian desert. To remind us of that creature that has separated itself from the animal kingdom, reflected in its own self-awareness, a creature that could vanish in the blink of an eye. While the objects he has fused with nature will continue to decorate an uninhabited, silent world, waiting for the next animal that comes across the mirror and learns to recognize itself.