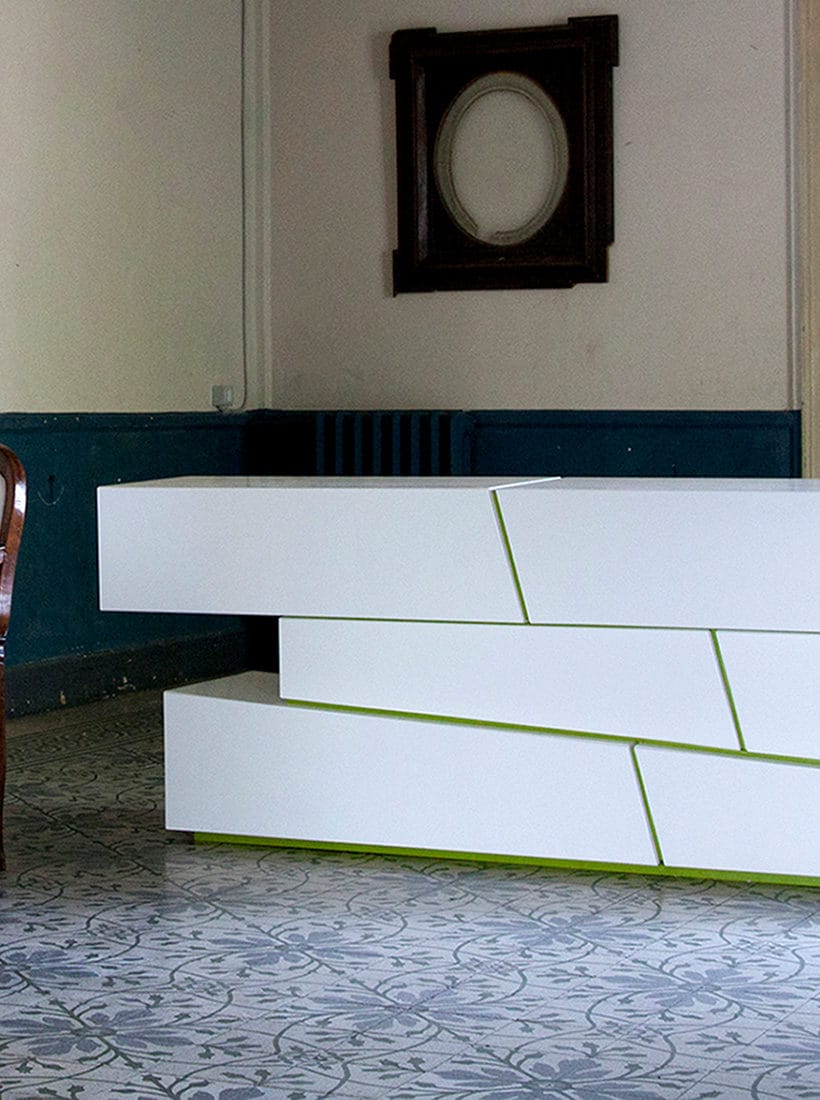 Sun and matter: the fundamental ingredients of Sicilian design. Dissolved in the rivulets of the tradition, or gazing in the direction of the future, along two lines of creative endeavor, ‘Apollonian’ and ‘Dionysian,’ bordering the entire spectrum of design action.

Among the talents on the Apollonian side, Giuseppe Pulvirenti stands out for his ‘classical’ background in the ancient sense of the term, since he studied architecture, set design and theater, namely the coordinates of reference of that ‘stage space’ that in Magna Graecia hosted the voices of orators that echoed from the amphitheater to reach an entire polis.

On the Dionysian side, we find the approach of another protagonist of today’s scene in Sicily, Andrea Branciforti (Studio Improntabarre), an extremely nimble manipulator of design to achieve a quasi-artistic blend.

Nevertheless, though the overlap of art and design has long been a typical characteristic of Mediterranean creativity, it would be a mistake to see an opposition between a ‘proto-industrial’ Sicilian design and the faster development of design and industry in the north.

On this point Dario Russo, professor of Design History at the University of Palermo and director of the 100eLAB cultural association for the promotion of Sicilian design, has some very clear ideas: “If we assume that design developed in Italy starting in the postwar era, then the south can be seen as lagging behind.

But if instead we talk about the industrial revolution and modernity as such, we can see that the south has been way ahead of the north, from the achievement of the Napoli-Portici railway in 1829 to the Ferdinando I, the first steamship to sail the seas, launched in 1818, even ahead of England.

It is no coincidence that in the early 1900s Palermo still had an ‘enlightened’ bourgeoisie, to the point of allowing Ernesto Basile – the most important exponent of Art Nouveau in Italy – to make authentic masterpieces in the context of architecture, and the nascent field of design.

For Ducrot he played the very modern role of a choreographer, something like what we call an art director today. Basile designed not only refined furnishings for villas and buildings, but also industrial products ante litteram conceived with an eye on industrial processes, for the mass market, like the Tipo Torino chair in 1902 and the Faraglia chair in 1906.”

Experiences like that shed a new light on Sicilian design culture.
“In effect, these episodes take on importance in today’s perspective, because for several years now there has been a positive effort to reconstruct some of Basile’s pieces, with material and immaterial updating, thanks to the collaboration between the University of Palermo, Archivio Basile and the Palermo-based company Caruso Handmade.
This is a rather complex operation, because besides its educational and scientific value, it also has commercial impact, especially with respect to the Arab Emirates and Russia. An adventure entirely Made in Sicily.”

Speaking of Made in Sicily, what is the relationship between this ‘trademark’ and other realities in Italy, like Milan, that have a more pronounced design culture?
“When the great exploit of Italian design was happening in the north in the 1970s, Sicily was cut off from the main circuit of companies, designers and critique (the specialized magazines played a fundamental role). Therefore there was a continuation, on an island rich in material culture, of experiences of craftsmanship, some of them at very high levels. The study on crafts workshops in Palermo conducted by Anna Maria Fundarò is very interesting, for example, in this sense.
Another case is that of the Bivona chair, which is very widespread in southern Italy, and represents in Sicily what the Chiavarina represents in Liguria: a well-made, popular crafts product. Had Gio Ponti and Cassina met in the south – who knows? – the Superleggera might have been a redesign of the Bivona chair.
The role of Tito D’Emilio, a Catania-based dealer who won the Compasso d’Oro for the career, has also been fundamental, as a distributor, not as a designer or producer, because of his contribution, starting in the 1960s, to bring design culture into a ‘geographically disadvantaged territory.’ ”

How does this tradition hook up with the latest developments in design?
“Looking towards the near future (the natural dimension of design), in the passage from mass production to ‘mass customization’ two directions come to mind: so-called art-design, with small production runs and a high level of symbolism, and the possibility of taming new digital technologies like 3D printing.
In the post-industrial society, in fact, the south is not at a disadvantage with respect to the north. On this topic, I can mention a group of professors at the University of Palermo who are working in synergy with WASP of Massa Lombarda, one of the world’s most innovative centers of experimentation in the field of 3D printing, also with Sicilian designers like Flavio Gioia and Federica Ditta.
Cases like this demonstrate that the creation of a system between the university and companies, of research, experimentation and innovation, is fundamental and pays off.