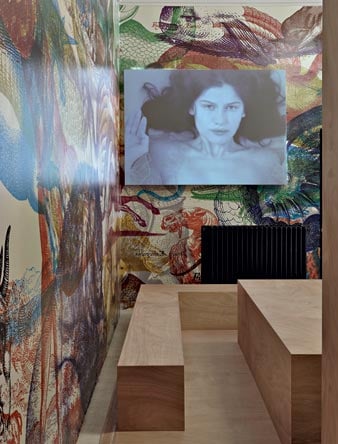 This has been the guiding idea in the project of renewal and expansion of the Civic Museums of Reggio Emilia, completed in May, with a coda that will conclude during the year to come. The project involved Palazzo San Francesco, a structure that started as a monastery (1265), and since the early 1800s had a range of functions, until it became the location of the precious collections of exhibits on natural history, history and art of the local community. The nucleus of the civic collections was the extraordinary 18th-century accumulation of the scientist from Scandiano Lazzaro Spallanzani, including zoological, paleontological, mineralogical and botanical exhibits, later joined by the paleoethnological collections of the priest Gaetano Chierici, various art collections, and a large number of objects of memory of the city, its history and its people. The project by Italo Rota covered the restructuring of the building, with the reorganization and modernization of the first two floors, previously utilized as museum spaces, and the total recovery of the third floor (1800 m2 of additional exhibition space), containing areas for temporary exhibitions, for the Kunsthalle on two levels, an agorà and a workshop, as well as rooms for designers and makers (digital artisans) of the local Fablab. On the first floor, with the reception and the Spallanzani collection, the atrium and ticket desk have been renovated, along with the bookstore and a study where visitors can spend time before entering the museum proper. A room where the walls feature large graphics and multicolored figures of animals, almost an introduction, in dream dimension, to the encounters between nature, history and the present that await them. On this level, and on the second, the architectural intervention substantially respects the typological, historical and structural characteristics of the building, updating functions and interpreting the spaces in keeping with an outlook that suggests – through lights and neutral surfaces, and the introduction of contemporary elements – a true dream dimension. The space of the museum in the vision of Rota is defined as an area for imagination and the unconscious, in which to come across the traces of the past, through passages and leaps of awareness, rather than being only devoted, as in the past, to the rational, positivist aims of study and classification. This vision triggers modular lighting elements that trace paths and poetically define volumes, furnishings and works, but also contemporary inserts that break up the established order here and there, like the red lacquer surface with a luminous insert placed on the 19th-century table of the ticket desk, or the wooden coffers that enclose certain portals of the gallery, one of which displays, as if to survey the passage, the funerary mask of Spallanzani himself, lit by three naked light bulbs, as in a theatrical mirror. To continue with the free associations, the architect has identified, for each level, a Pièce Unique space, for one of the most excellent pieces of the civic collections: the Chiozza Venus (first floor), one of the most ancient idols of the Paleolithic era; the very rare golden cup (second floor) dating back to the Bronze Age and found at Montecchio Emilia in 2012; the brass and ceramic sculpture La monta solare by Fausto Melotti (also on the second floor) from 1969-79; the Cross of Light by Claudio Parmiggiani on the upper level. The third and last floor, previously not utilized, has been converted into space for contemporary art, with multiple functions: temporary exhibitions, the makers lab, an art gallery, the agorà and workshops for the public. Here the long wing set aside for temporary exhibitions is the location, until Expo 2015, of the exhibition “For Inspiration Only,” created by Italo Rota, which assembles hundreds of objects from the storerooms of the Civic Museums, of various types and eras, that narrate stories of the city. A total of 365 tales, 50 already written, others that will be added during the year, to which every citizen can add a fragment of personal memory. With this exhibition, and in this space, the museum concept developed by Italo Rota for this project can clearly be grasped: a space for collective narration where objects, freely combined, become stimuli for awareness, for reinterpretation of the past and invention of a future for the community. “In this phase of change, people are conserving things, homes are like mini-museums,” Italo Rota says. “To conserve means to establish relationships, to decide what and how much is important: the form of the museum comes from this. For Inspiration Only is a selection of objects done with the sole purpose of inspiring ideas. Without imposing a vision, a logic of interpretation. In this moment of great transformations, conserving is inseparably linked with innovation.”