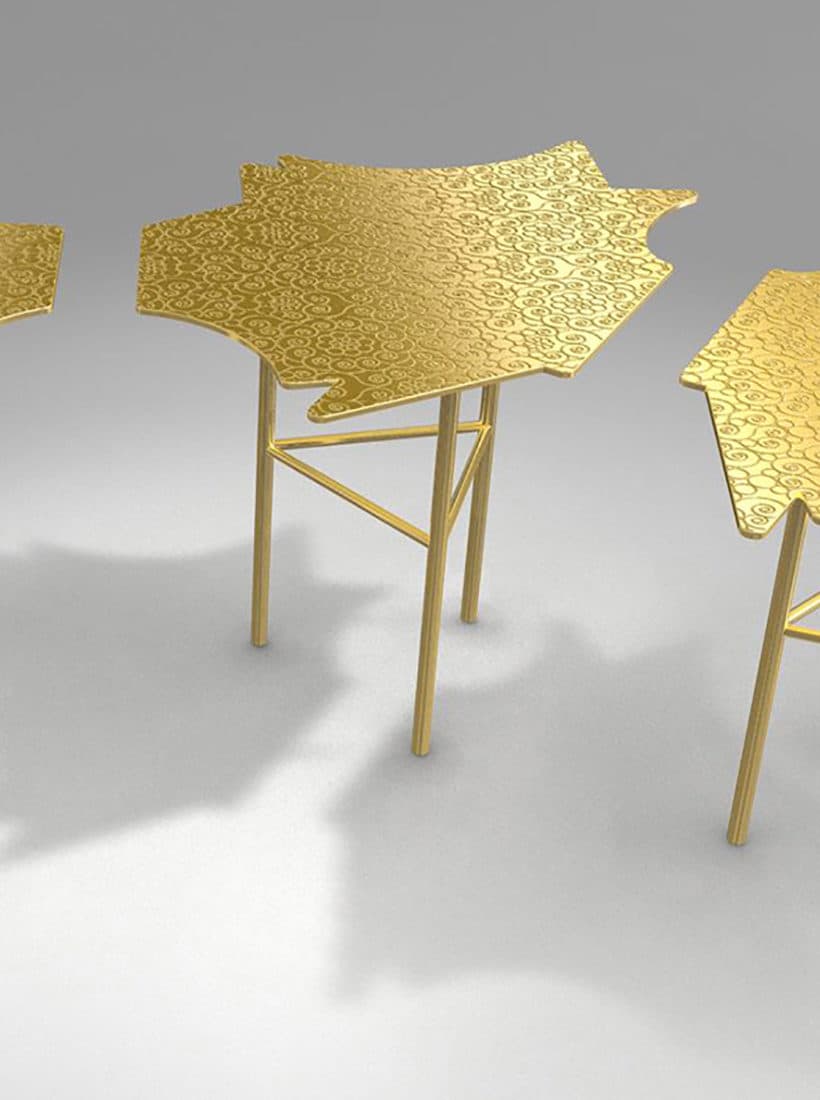 “Albero stilematico” is a sculpture installed in the courtyard of MUDEC during the exhibition on Wassily Kandinsky (15 March – 9 July 2017). It was made by attaching seven flat forms (stylemes) cut from Abet laminate around a steel pole, 6 meters high.

“This sculpture is the result of the empathy I have always had with the world of Kandinsky. Though the reference is not direct, the image of this geometric tree reminds me of the signs of this great artist.”

Designer-architect Alessandro Mendini works, in this case, in the guise of an artist: an artist of the 21st century who comes to terms with a master, one of the greatest masters of the historical avant-gardes of the 20th century. A daunting comparison for anyone, but not for Mendini, who knows and loves art too much to run the risk of citation, or of a direct face-off.

So while many will notice the affinities between the languages of the two artists, I see the precise opposite, namely that Alessandro has subtly focused on the differences. Of course you have to look more closely to avoid that initial, immediate, emulative suggestion, but if the forms of Kandinsky are remnants of unconscious poetry that just barely emerge in the light of reality, those of Mendini, apparently similar, are actually always equal forms (stylemes, exactly), obsessively repeated based on an alphabet of seven syllables.

As much as the first method, that of Kandinsky, is absolutely personal and impossible to repeat, so the second, that of Mendini, is intentionally mechanical and repeatable. To the same extent that the first gives expression to the unconscious, the second works on consciousness. So this ‘sculpture’ is really a sophisticated operation of ‘industrial art’ (not by chance, Mendini has always thought of design as the decorative art of the 20th century): it could be repeated, always different and always the same, in a thousand squares of a thousand Italian cities.

I have known Sandro long enough to keep in my studio a ‘tool’ for ‘art drawings’ he gave me many years ago: the ‘Mendinigrafo,’ a conceptual parody of curved lines, of boring stencils. I think it is one of his most beautiful and theoretically potent projects. With it, this very day, I will begin to draw many other ‘stylematic sculptures,’ to fill the world with fake Mendinis, intentionally realer than real (with apologies to Kandinsky). The first ‘face’ of Mendini in this year, 2017, urges us to start from art, first, and then with the market in our work.

Second ‘face’: Mendini the mystic
“Proto-calice”: it is actually a chalice for the mass, namely the most sacred of all ‘sacred vessels,’ destined to contain the sacramental wine. Mendini, whom we have always imagined as a religious but pantheist spirit, approaches the very complex theme of sacred furnishings: the design brief behind the creation of a new chalice covers many problematic points, in terms of material, proportions and decoration.

Mendini says that he proceeds with the spirit of a child: “The simplicity of my chalice (base, trunk, vessel) makes the image of the object schematic, because the memory latches onto its proto-form instead of a developed form. As if it were a possible drawing made by a child, a mystical and religious child.”

Getting away from the formal result of the chalice for a moment, which in any case reaches a high degree of design refinement and paradigmatic character with respect to possible interventions on the sacred (observe the decoration of the trunk obtained by repeating basic, allusive geometric forms like the circle, the triangle and the parallelepiped), we can consider how this provocation of the ‘child designer’ can be important in Mendini’s poetics (so much so that as he ages, Alessandro is physically returning to childhood).

The awe in the face of the discovery of the world, the ability to bring value to even the most banal objects, the innate chromatic and decorative urge, the ability to use play for instructive ends and to form teams to approach difficulties, are all characteristics we could attribute to a child or to Mendini.

Without forgetting that to some extent a ‘naive’ vision, not mediated by social conventions, is typical both of a child and of Alessandro. A vision that has allowed the latter to convey the most ferocious truths, the most disruptive revolutions, the subtlest critiques under the form of striking aphorisms or nervous graphic forms. Thus the ‘second face of Mendini’ in this year, 2017, urges us to work on the meaning of objects: a meaning to recoup beyond the function (the chalice, after all, is a glass) and beyond the form.

Third ‘face’: Mendini designer for industry
“Alex” and “Ninfee.” Please forgive me if to illustrate this third point I make use of two examples instead of just one. The third face of Alessandro Mendini, after the mystic and the artist, is not surprisingly that of the designer. It might seem banal: everyone knows Mendini is a designer!

Actually, personally, I think this is the most complex face from the standpoint of interpretation, or at least it is the one that has created the most problems for me. There are no doubts about the extraordinary ability of Mendini as an artist-decorator, or the extraordinary talent of Mendini as a poet-writer (words, after all, are simply another type of styleme – prefigured form – that Mendini composes), but how can these abilities (for over 50 years at this point) have a relationship with work for industry done in a serious, professional, at times even profitable way?

Work that takes technological and productive problems into account, that copes with briefings and marketing meetings and cost analysis and questions of packaging and regulations (in short, the everyday labor of all of us who have chosen to come to grips with products). And instead that relationship exists! Here it is demonstrated by the chaise longue “Alex” for Wet Italia and the “Ninfee” tables for Ghidini 1961.

While the latter, for their production technique, type and decoration, could be compared to some extent to the world of arts and crafts, there is little doubt that a rotomolded plastic object like the chaise longue belongs in the fullest and most problematic way to the dimension of industry.

Here Mendini approaches the project starting with the very constitution of the material, which with the open skin option makes it possible to maintain a ‘transparency’ between the filaments of polyethylene, and then to approach the form as if it were a spiky origami rather than the classic boring surface of rotomolding.

Finally, he thinks of a decoration (an intrinsic one, not overlaid) that takes advantage of the characteristics of the recycled material itself, transforming the variety of the scraps into a ‘pointillist’ work, achieving an atmospheric result that brings this chaise longue close to the famous Proust armchair. So the ‘third face of Mendini’ in this year, 2017, urges us to respect industry without failing to interpret it and therefore to ‘impose ourselves’ upon it.

In conclusion, besides admiration, what are we left with after observing this Mendini 2017, one in three? I’d say we are left with an invitation to anti-specialization. An anti-specialization seen first of all as a possible antidote to the power of marketing and technology, and therefore to the progressive uniformity of products. The ‘non-specialists’ (who can, however, use specialists as consultants) are one of the great secrets of Italian design!