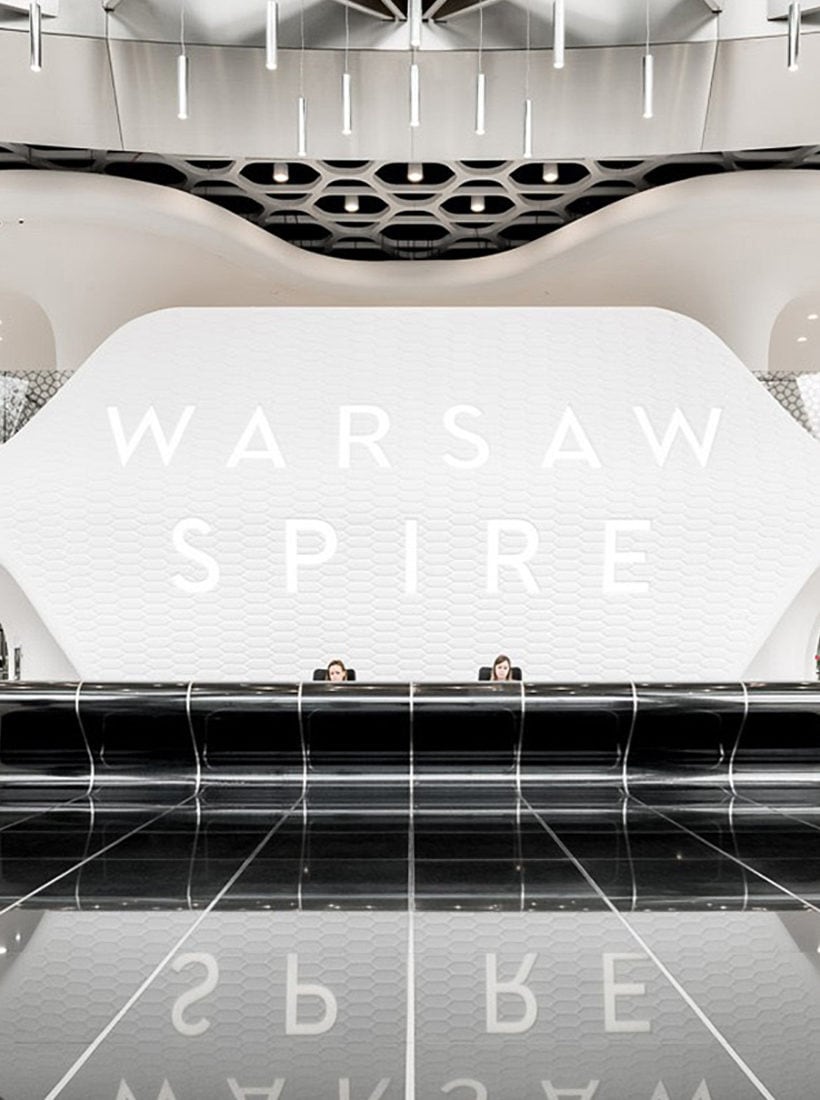 Created by Ghelamco to celebrate 25 years of real estate development in Poland, the Warsaw Spire designed by the studio Jaspers-Eyers architects in collaboration with Projekt Polsko-Belgijska Pracownia Architektury, built in three years of constant work, is composed of a glass tower with a height of 220 meters symmetrically flanked by two lower volumes (55 meters) to create a new urban plaza.

The complex covers a total area of about 109,000 square meters and is occupied by various international companies and brands, including Samsung, BNP Paribas Securities Services and the Center for EU Transport Projects (CEUTP). It has quickly become a landmark and a focal point of business activity.

While the tower rises with a sculptural form generated by an elliptical plan of different sizes wrapped by two symmetrical glass shells that open like a chalice towards the top, the idea of creating a new plaza for the city also seems to be the red thread of the interior design project of Mac Stopa/Massive Design, as underlined in the definition of the hall on the ground floor.

This space of about 1650 square meters has been taken as a single zone forcefully marked by the central block of services, staircases and elevators, creating an opportunity to experiment with a sort of inhabited sculptural figure (a mezzanine-balcony of over 500 square meters developed around the central nucleus).

The design of the hall takes advantage of the elliptical form of the tower, organizing an axis of longitudinal reference that aligns the cafe-restaurant at the entrance, located on the opposite side. This facility stands out for its black reception counter, conceived as a three-dimensional materic and chromatic extension of the absolute black granite flooring, which functions as a large threshold for visitors and as a magical ribbon to generate the functional conclusion.

The idea of uninterrupted space is emphasized by the glass perimeter, while the available height suggests the idea of a covered plaza, a continuation of the outdoor plaza surrounding the buildings. The white, sculptural central block uses a suspended ceiling shell as the complementary feature that reinforces its form and size, while the design of the organic and modular pattern of the enclosure – partially repeated in the screen printing of the glass parapet of the balcony – offers an effective porous surface, almost an architectural pergola floating in the welcoming space.