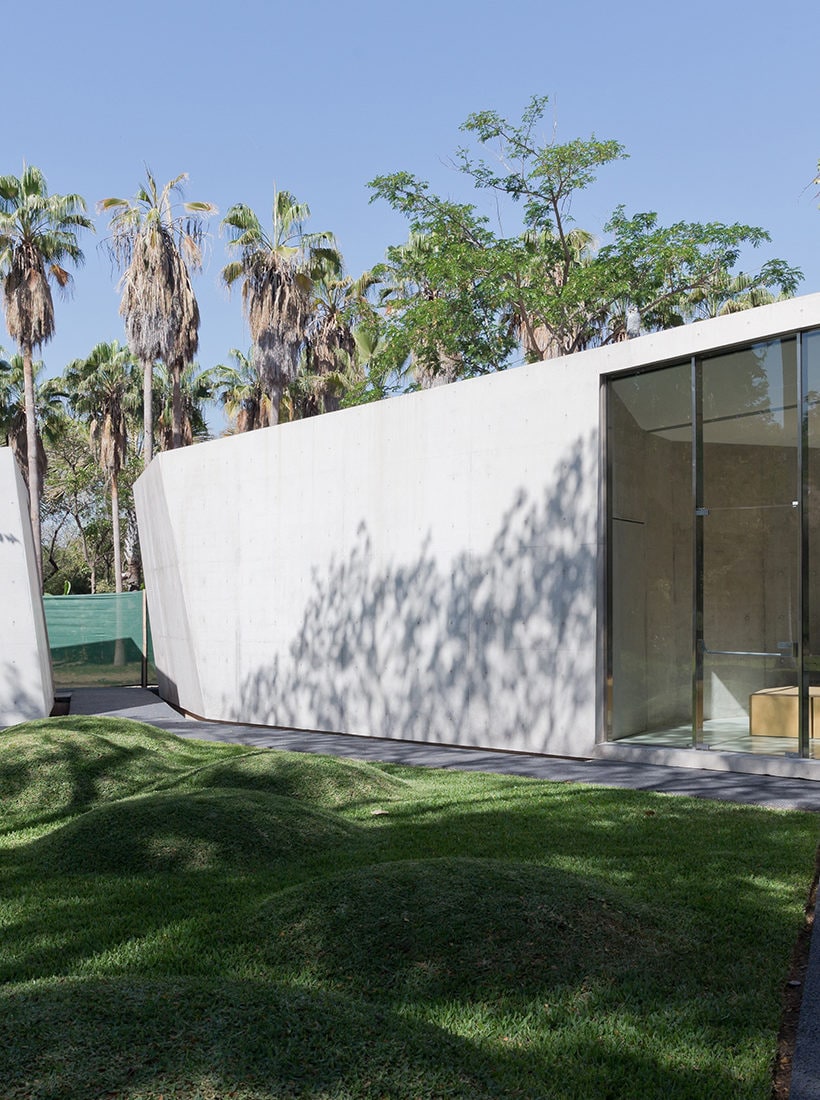 For Tatiana Bilbao landscape is not the backdrop for abstract, autonomous works of architecture inserted from above and defined a priori, but the element that is called into play to become the protagonist of the design process, transforming constructed architecture into a new element that fits into the host environment.

These works of architecture in are located in natural contexts or manmade gardens, but they reject any possible temptations of decorative mimesis. Constructions that do not rely on trees or bushes on their surfaces to camouflage their volumes, buildings that do not brandish green roofs but insert themselves in a careful but confident way in the various situations – interpreted in terms of topography and botanical consistency – with which the architectural design sets out to create a process of osmosis, in an empathic way, without concealing its overall figure. The selected examples shown here document this complexity and this design research.

The house at Ajijic (2010-2011), a weekend villa, built in a town in the state of Jalisco on the north shore of Lake Chapala, Mexico’s largest fresh-water lake, has been designed to meet the needs of a family of three. It is the sum of three separate cubes, each assigned to one member of the family, and a fourth unit for the collective space of the family nucleus. The cubes are cut by the inclined planes of the single pitch of the roofs in fair-face concrete, arranged at different angles to create a geometry of varied heights, on a plan marked by the different positions of the four volumes that form the whole.

Large openings and porticoes integrated with the internal spaces pace the front towards the lawn and gardens, while the back is more compact, with narrow vertical windows. The entire complex has been built using the traditional rammed earth technique, where a mixture of moist earth with a stabilizing additive is packed into formwork. In this case the soil dug on the site has been mixed with cement, with a formula ranging from 8% to 12%, reducing construction costs but above all obtaining a load-bearing wall (inside and outside) with a rose color alternating with irregular bands of gray, for an evocative materic-chromatic effect. The walls breathe to regulate the micro-climate of the interiors, establishing a close relationship with the surrounding environment.

Casa Ventura (2004-2014) stands on a steep densely wooded lot near Monterrey. The project had to come to terms with a hard-to-access site where it was impossible to build by means of excavation and embankments. The idea was to follow the natural additive geometry of cells, also like the mushrooms that grow horizontally on the bark of trees. So the house is composed of “independent” pentagonal volumes of variable geometry, interconnected like a biological organism, anchored to the slope and surrounded by trees that have been conserved in their original positions.

The architectural cells contain the various domestic spaces and always have one full-height glass side facing the dense vegetation or the city seen from above. Instead of building a house on a hill, the architecture has been conceived as an integral part of the hill, accumulating there like an inhabitable rock formation emerging from the greenery of the trees that surround and cross it.

Like a magical architectural fractal, the house perched over the cliff, entirely in concrete, with its fronts sculpted by narrow horizontal bands, is like a composition open to possible future added cells, confirming its character as a ‘biological organism of infinite growth.’

Also in the project for the service structures of the Culiacán Botanical Garden founded in 1986 by the engineer Carlos Murillo, Tatiana Bilbao takes the path of architecture with a strong identity, organized with recognizable, forceful volumes capable of interacting with the landscape of the garden of which they become a part.

A project that began in 2004 and was completed in 2011, that has followed the growth of the vegetation over time, inserting monolithic and distorted structures, passages and new paths, finding room amidst the trees, or embracing them, as in the design of the outdoor auditorium, a concrete enclosure set down in the greenery to construct a volumetric landscape next to the botanical and didactic landscape.

Jardín botánico, Culiacán: view of the recognizable compact volumes of the service building.
View of the amphitheater inserted in the vegetation of the Botanical Garden.
Portrait of Tatiana Bilbao.
Jardín botánico, Culiacán: view of the glazed classroom and the external routes.
Casa Ventura: view of the house inserted in the dense surrounding vegetation. The house is composed of ‘independent’ pentagonal volumes, with variable geometry, interconnected like a biological organism.
Casa Ventura, view of the living area: a system of interlocks found in the interiors.
Casa Ventura: the entrance zone with the conserved tree inserted in a special opening in the roof.
Casa ventura: view of the two-story space for the large staircase.
Casa Ventura : detail of the facades, entirely in concrete, sculpted with horizontal bands.
Casa Ajijic: view of the facade of the house towards the garden.
Casa Ajijic: view of internal circulation spaces.
Casa Ajijic: view of internal circulation spaces.
Casa Ajijic: evening view of the bedroom zone.
Casa Ajijic: the luminous living area. The entire load-bearing architectural volume is made with the traditional rammed earth method, where a mixture of humid earth and stabilizing additive is pressed into disposable formworks. The result is a load-bearing wall (inside and outside) with a rose color and grayer irregular bands, for an evocative range of hues and textures.
#architecture #design #progetto